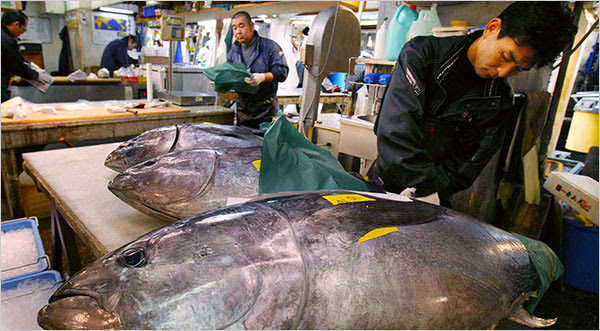 THE NEW YORK TIMES has a sad report, "U.N. Rejects Export Ban on Atlantic Bluefin Tuna", by David Jolly and John Broder. If you're a polar bear, it's also a bummer, too.

Delegates at a United Nations conference on endangered species in Doha, Qatar, soundly defeated American-supported proposals on Thursday to ban international trade in bluefin tuna and to protect polar bears.

Atlantic and Mediterranean stocks of bluefin, a fish prized especially by Japanese sushi lovers for its fatty belly flesh, have been severely depleted by years of heavy commercial fishing, while polar bears are considered threatened by hunting and the loss of sea ice because of global warming. The United States tried unsuccessfully to persuade delegates to the Convention on International Trade in Endangered Species of Wild Fauna and Flora, or Cites, to provide strong international protection for the two species.

“It wasn’t a very good day for conservation,” said Juan Carlos Vásquez, a spokesman for the United Nations organization. “It shows the governments are not ready to adopt trade bans as a way to protect species.”

Then there's Japanese whale hunting, aka "research". I hope all those shiny, happy people in their Toyotas, Hondas and Nissans feel warm and fuzzy. Then there's dolphins, and "The Cove". A pox on all their keiretsu. Like Republicans, the only thing they respect is money — so I don't buy Japanese.