The blazing fury of a reseated parliament...

Given the extended and expensive time given to stolen from taxpayers by the Harper Party to "recalibrate" themselves you might have expected every moment spent in Parliament to simply drip with drama. Private members' bills might have a tough time surviving given the need to reintroduce a huge amount of the Harper agenda killed by proroguing and running for the nearest safe corner.

Yet, at 1:35 PM this past Friday Harper Party member and MP for Stormont-Glengarry-Dundas, Guy Lauzon, introduced a motion regarding the Canadian Navy. A private member's bill.

Lauzon had something else on his mind. Uniforms; naval uniforms; naval officers' uniforms; specifically that little loop on the braid of our rank insignia we used to call, "Elliot's Eye".

I am very honoured to speak in the House today to my private member's motion, Motion No. 459, which would introduce the executive curl on the navy uniforms.

40 years after it was removed from the braid, the Conservative "recalibrated" government of Steve Harper, took valuable time in the House to have a motion passed which would have Elliot's Eye re-established on Canadian naval officers' uniforms.

Just don't be in the navy and ask the Conservatives for a new ship, even if they promised it in the past. And the featherweight waste of time didn't go unnoticed.

(Robert Oliphant, Don Valley West) I have some concerns, however. At some point, the hon. member might want to comment on why, with all the issues in Cornwall and the surrounding area, this one has grabbed his attention when that particular community is facing some very significant economic, tourism and other development issues that could the subject of a very serious members' business procedure. I say that because I am somewhat jealous of the hon. member actually getting precedence to be able to present a piece of business. It is rare, because members can often wait six, eight or ten years to have a bill or a motion come to full debate.
The issues in Cornwall and the surrounding area are significant. I am wondering why the member did not take on the issue of contraband cigarettes, perhaps, and the effect they are having on children and youth across the country and very directly in his community on relations with first nations communities. That is of concern to me. Also, I wonder whether or not he had thought about asking his government to appoint a mediator to work on the longstanding dispute between the Canada Border Services Agency and the Akwesasne Nation. Perhaps it is time that the member steps up to the plate to work for his constituents on that very important issue of the reputation of his community, which has been tarnished over these last several months.
The motion the member has presented is rather weak tea. It simply requests that the government consider reinstating a piece of embroidery on a uniform, which is not to denigrate whatsoever the support we give to our troops and our veterans, which is unanimous in this caucus. What we are pushing for, instead, is for the hon. member to address the other important economic social and cultural issues that he has responsibility to stand up and talk about in the House.

This bunch of hillbillies just keeps getting better, don't they? Words in a song; braid on a uniform. I can hardly wait for recipe swapping hour.

While we're pretending that the only thing important enough to address in Parliament is buttons and bows on the uniforms of our sailors, Lauzon might be taken to task for his failure to acknowledge the lower deck of the senior service.

It's all well and good to serve the Harper Party purposes by introducing ( and having carried) a motion which gives the Naval Officers' Association of Canada a reason for a wet dream, but what about the folks who do all the heavy lifting? If we're going to create a distinctive separation of our naval officers from their army and air force kinfolk then it is only courtesy that it should extend to the messdecks. In that regard, I expect to see another motion changing the rank badges of the real troops. 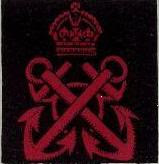 While we're at it, why don't we reintroduce good conduct badges? Nothing like confusing everybody and getting downright British about it. Let's face it the average Canadian doesn't know whether their punched, bored or blown out with a 4.7 inch high-elevation gun.

Yes, for those who know, I've left out CPO 2nd Class and CPO 1st Class because honestly, every time I wiped my nose with my sleeve, those extra buttons always gave me a nose-bleed.
Posted by Dave at 12:17 Recommend this Post