Université Laval sure knows how to build 'em . . . 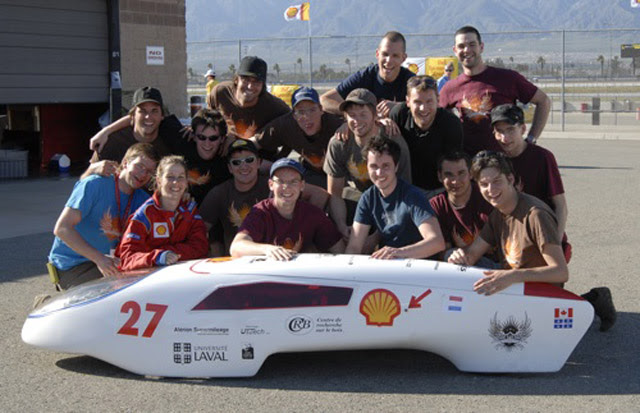 WIRED REPORTS THAT A CAR designed and built by students from Université Laval has won the Shell Eco-Marathon for the second year in a row, with a winning consumption of 2,487.5 MPG. That's a lotta empeegee, folks. According to Tony Borroz,

This year’s Shell Eco-Marathon was held over this past weekend, and the winner in the top “prototype” category was a bunch of Canadian students. At first, that might seem surprising, but as it turns out, the students from Laval University won last year, so they seem to be the team to beat.

Turns out that in 2010, it was the same team that won in 2009: A student team from Laval University in Canada. They brought home the gold in the prototype category from the race in Houston, Texas with a winning miles per gallon figure of 2,487.5 mpg. The Laval University team’s car used an Alerion Supermileage combustion engine to accomplish the feat. Interestingly, they were unable to match the MPG figures they set last year, a staggering 2,757.1 mpg.