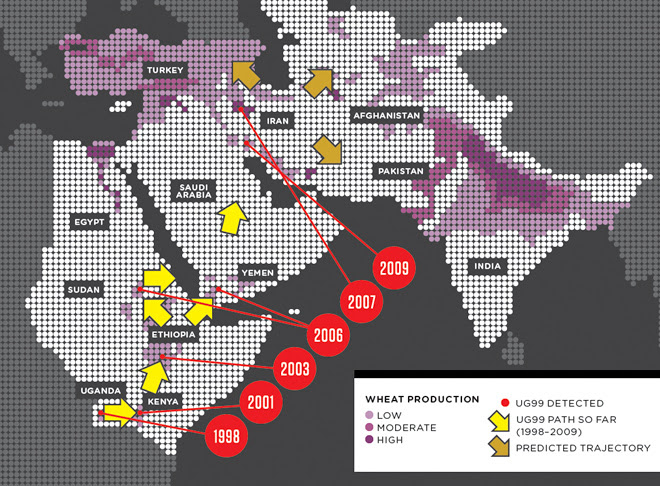 WIRED MAGAZINE has a very disturbing report by Brendan I. Koerner, "Red Menace: Stop the Ug99 Fungus Before Its Spores Bring Starvation". It's about a mutant fungus that originated in Uganda, discovered in 1999, that is starting to spread.

Why should you care? Well, according to Mr. Koerner,

Stem rust is the polio of agriculture, a plague that was brought under control nearly half a century ago as part of the celebrated Green Revolution. After years of trial and error, scientists managed to breed wheat that contained genes capable of repelling the assaults of Puccinia graminis, the formal name of the fungus.

But now it’s clear: The triumph didn’t last. While languishing in the Ugandan highlands, a small population of P. graminis evolved the means to overcome mankind’s most ingenious genetic defenses. This distinct new race of P. graminis, dubbed Ug99 after its country of origin (Uganda) and year of christening (1999), is storming east, working its way through Africa and the Middle East and threatening India and China. More than a billion lives are at stake. “It’s an absolute game-changer,” says Brian Steffenson, a cereal-disease expert at the University of Minnesota who travels to Njoro regularly to observe the enemy in the wild. “The pathogen takes out pretty much everything we have.”

Indeed, 90 percent of the world’s wheat has little or no protection against the Ug99 race of P. graminis. If nothing is done to slow the pathogen, famines could soon become the norm — from the Red Sea to the Mongolian steppe — as Ug99 annihilates a crop that provides a third of our calories. China and India, the world’s biggest wheat consumers, will once again face the threat of mass starvation, especially among their rural poor. The situation will be particularly grim in Pakistan and Afghanistan, two nations that rely heavily on wheat for sustenance and are in no position to bear added woe. Their fragile governments may not be able to survive the onslaught of Ug99 and its attendant turmoil.

And it gets better:

Ug99 isn’t just on the march. It’s mutating, too: It has developed the ability to overcome resistance genes that were being used to combat it. At least four variants of the pathogen have been discovered to date, and each has the ability to knock out resistance genes once thought to be worthy substitutes for Sr31. The most troubling of these variants, first detected in Kenya in 2006, tears through Sr24, the gene that so many North American wheat producers rely on to keep P. graminis at bay. Another variant shreds Sr36, commonly used in the winter wheats of the Great Plains.

Can you make brownies with rye flour?