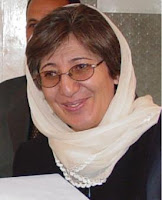 Meet Dr Sima Samar, MD
-Chair of the Afghan Independent Human Rights Commission,
-UN Special Rapporteur on human rights in Sudan, and
-founder of the Shuhada organization which runs hospitals, schools and health clinics for girls and women all over Afghanistan and Pakistan.
.
After obtaining a degree in medicine in 1982 from Kabul University, Samar was forced to flee to the countryside with her young son after the arrest of her husband.
The Telegraph :

"She began attempting to treat patients against a background of extreme poverty, war, and harassment by the Taliban, who have virtually criminalised the delivery of reproductive health services to women and girls. In an article for the New England Journal of Medicine she describes having “to walk or travel on horseback or by donkey for three or four hours in each direction” to get to a patient, often finding that she had died before she got there.

In her long, but ultimately triumphant career, she has been forced to smuggle birth control supplies under her clothing; she has endured death threats and been jailed; her hospitals have been bombed and looted by Taliban, and her medical director jailed for a year without charges; she was appointed to the Karzai government’s legislature then forced to resign when she was made comments that were critical of sharia law in an interview with foreign [Canadian] journalist."

Despite attacks on her reputation from Afghan politicians - in December she was accused of using her Shuhada organization as a front for running brothels - Dr. Samar was widely expected in Afghanistan to win last year's Nobel Peace Prize, the one that ultimately went to some guy who was nominated 12 days into his new job. .
A woman, as noted in the Telegraph article above, with human rights "street creds", she was also on the board of directors of the beleaguered Rights & Democracy Canada from 2007 until her resignation in January 2010.
Today in the Ottawa Citizen she speaks out : Why I resigned from Rights & Democracy
on how "Canada's leading international human rights agency has been destroyed" by the new board members whose views have been so amply represented in the pages of the National Post recently while the staff at R&D have been muzzled. It's very interesting to finally read an insider's opposing account, and one that is not primarily informed by editorials at the rightwing Israeli NGO Monitor. Samar concludes :

"Sadly, this is not the glorious image of the tolerant and fair Canada that inspires us in Afghanistan. This is a denial of rights and democracy, and the destruction of a great Canadian institution."

"As we approach Canada’s 150th Anniversary, we are all aware that there is a great deal more to be done in Canada to ensure women’s equality. More women in politics and managerial positions, accessible child care, changes to the Indian Act, equal pay, and equal pensions are just a few of the things that the Royal Commission on the Status of Women identified as necessary for equality nearly fifty years ago."