The Three Amigos shovel some PR for Uribe 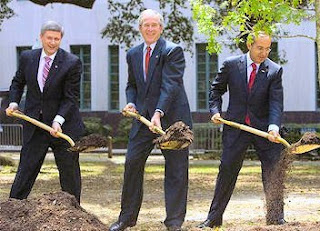 in advance of news of his cousin's arrest for alleged ties to death squads.
Seems my question on Tuesday night at Creekside as to why each of the three amigos mounted such a stirring and seemingly completely off-topic defence of Colombia's President Uribe in their "Joint Press Availability" was answered in the following day's news :
WaPo : Cousin of Colombian President Arrested in Death Squad Probe

"Authorities on Tuesday arrested former senator Mario Uribe, a cousin and close ally of President Alvaro Uribe, for alleged ties to death squads in a widening inquiry that has implicated nearly a quarter of Colombia's Congress.
The arrest of the former senator, who built a formidable political movement that helped his cousin win the presidency in 2002, comes during an institutional crisis that has tarnished a country closely allied with the United States."

"Colombian President Alvaro Uribe denied Wednesday charges he helped plan a 1997 massacre by right-wing paramilitaries, while confirming that his role was being examined in an official investigation."

At their Summit presser, Bush, echoed by Harper, proclaimed :

"we got no better friend in South America than President Uribe."

So The Three Amigos presumably already knew about the coming arrest and thought they'd shovel a little PR manure for the Uribe government and their pending free trade agreements with Colombia before the rest of us got wind of the arrests.
Linda Carlsen of the Americas Program, Center for International Policy, also writing before news of the Uribe arrests broke, dissects "the prominence of this issue in the official statements" here:

"Again the summit is being used to advance the failing Bush administration domestic agenda. Considering again that the U.S.-Colombia Free Trade Agreement is not an issue in Mexico, the geopolitical strategy of building alliances among rightwing governments in the hemisphere to confront the growing number of leftwing governments becomes clear. This ideological taking sides has no place in a trilateral summit dedicated to North American integration issues and panders to the Bush agenda."