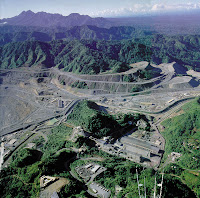 Former Scots Guards Lt-Col. Tim Spicer is not a member of the highly exclusive Special Forces Club in London. We don't know if he applied for membership and was rejected or if he even applied at all. It would stand to reason however, that he would want to take advantage of the networking opportunities such membership would afford. Not that it matters. Spicer is probably laughing at the fact that the secretive Special Forces Club is imploding over finances and internal political squabbling.

In part one we found Spicer brought into a rebranded Executive Outcomes (EO), a well equipped, well organized, professional mercenary army made up primarily of former South African soldiers. Spicer was tasked by Tony Buckingham and Simon Mann to lead Sandline International, little more than a repackaged EO.

The M.O. of Executive Outcomes had become wholly visible. Buckingham would offer his counter-insurgency army to weak African governments facing guerrilla activity in return for lucrative diamond and oil concessions. Buckingham's resource companies, Canadian-based Heritage Oil and DiamondWorks came along after EO had done their work.

The creation of Sandline and the appointment of Mann's former Scots Guard colleague, Spicer, was intended to provide the optical illusion of a respectable "private military company", the sanitized language for mercenaries.

The government of Papua New Guinea under the leadership of Prime Minister Julius Chan was having trouble with a rebel insurgency on the island of Bougainville. Chan had been refused troops by both New Zealand and Australia and repeated assaults on the rebels produced no appreciable results. Through a shadowy series of international contacts PNG defence minister, Mathias Ijape made contact with Sandline International.

A deal was struck which would secure Sandline's services for $36 million and Spicer's troops started to arrive on 7 February 1997. The money was never authorized by the PNG parliament. Instead Chan ran the expense through the National Security Council. Budget cuts were imposed on a majority of government ministries. Unfortunately for both Spicer and Chan, the deal soon became public and the PNG army grew incredibly angry. So did the Australians who were demanding that Chan kill the deal. Unaware of the public and army outrage at the contracting of mercenaries Spicer and his force of South African mercenaries were arrested a little over a month after landing. The Royal Australian Air Force intercepted the Russian-built cargo plane that was carrying the mercenaries weapons and helicopters and detained it. The PNG army then overthrew Chan's government. Spicer and his mercenaries were jailed.

Sandline International, had stepped into a hornets nest. Papua New Guinea, despite serious internal problems, operated as a democracy. Even the ousting of Chan resulted in a civilian parliamentary government. What Sandline and Spicer had accomplished was to destabilize a government and create a constitutional crisis.

During the period that Spicer was in PNG, prior to his arrest, he spent a good deal of time in meetings with Deputy Prime Minister Chris Haiveta organizing a deal. True to the Buckingham model established with Executive Outcomes, Spicer appeared to be attempting to gain control of Bougainville Copper Ltd.

Charges against Spicer were set aside in return for his promise to cooperate with a government inquiry into the whole event. Spicer was released on 27 March 1997. As Spicer was on his way home, Buckingham, Mann and Sandline International went into overdrive, hiring a public relations firm to manage what can only be described as a PR disaster. It was all being handled from a front company known as Plaza 107 based in Chelsea. Behind that company operated Buckingham, Heritage Oil, Branch Energy, Executive Outcomes and Sandline International. In the subsequent inquiry by PNG into the whole affair the link between EO, Sandline and Buckingham were established beyond question. At an April 1996 meeting in Cairns Australia, between Spicer and PNG officials exploring a possible mercenary action on Bougainville, Buckingham was present. Another revelation at the inquiry was that Heritage Oil was described as the owner of Sandline International.

In August 1996, Spicer sent a letter to the PNG government offering mercenaries in exchange for a stake in the Bougainville mine.

And then things get really messy. In October of 1996 Tim Spicer was given an option of 10,000 shares in DiamondWorks. The share offering was made under the British Columbia Securities Act and specifies that such options are granted only to directors and employees of a corporation.

In February 1997, as Sandline/EO mercenaries were landing in Papua New Guinea, Eeben Barlow of Executive Outcomes was also made a shareholder of DiamondWorks. Simon Mann retained holdings in some of Buckingham's other companies although it is unclear whether he became a holder of DiamondWorks stock.

What is known, however, is that as Buckingham and Spicer were meeting with PNG government officials in Cairns Australia, Buckingham was putting the final touches on a deal that would raise cash for his Branch Energy. He was in contact with Robert Freidland, a Canadian with dual citizenship in the US, the owner of Ivanhoe Mines and a supposedly small holder of DiamondWorks shares. Freidland is also known as "Toxic Bob" after his gold mine in Summitville Colorado caused one of the worst cyanide spills in US history in 1993. In 1995 his Omai gold mine in Guyana burst its tailing pond and totally wiped out the life in two rivers. He has operations in Mongolia, Burma and a variety of other countries. Accusations have been leveled at him that his operations include child labour, near zero occupational health and safety standards and a clearly abysmal level of environmental responsibility.

Freidland's PR agency, when confronted with this information after the PNG fiasco claimed that Freidland's personal holdings in DiamondWorks amounted to three percent. However, Freidland's brother, Eric, was the president of DiamondWorks and Robert Freidland's holding company, Ivanhoe Capital Corporation, actually owned a 21 percent share of the company.

When the due diligence report on Branch Energy was issued to the company which would become DiamondWorks, detailing worth and potential, a line in the report made a statement which Buckingham, Mann and Barlow had always previously denied: "Both Sierra Leone and Angola have been under the duress of civil war, but peace has been achieved largely through military assistance provided by Executive Outcomes, Branch Energy's parent company, to the government of these countries." That due diligence report has oddly gone missing from the Vancouver Stock Exchange. Not, however, before Australian news outlets got their hands on it.

There it was. The mercenary army owned the mining company. And Freidland couldn't help but be aware of it and acknowledge it. Sandline was run by the same people and its operators were brought into DiamondWorks as shareholders. While Freidland is described as a pragmatist, he probably did not give a second thought to the mercenary activities of Buckingham, Mann, Barlow and Spicer. If they accomplished his goals, how they did it was probably of little concern. Freidland was used to dealing ignoring the habits of others. He had, after all, been heavily involved with a group of corrupt Burmese generals and had gone so far as to add them to the board of his interested mining companies. That was his style. His interest was in resource extraction and Bougainville had a highly viable copper mine. The same mine in which Spicer would attempt to negotiate a stake.

Bougainville Copper was perhaps more central to the Sandline/PNG operation than is obvious.

After the PNG fiasco Robert Freidland appointed two executives from the Hong Kong offices of the Jardine Fleming Bank to his executive management team at Ivanhoe. Julian Chan had coincidentally approached Jardin Fleming to manage a PNG government buy-out of Bougainville Copper and put control of the Panguna Copper Mine in the hands of the PNG government - before the deal had been sealed with Sandline for a mercenary operation and after the initial meeting with Buckingham and Spicer in Cairns Australia. In October 1996, PNG finance minister, Chris Havieta, traveled to London to meet with Spicer and further talks on having Sandline International mount a mercenary operation against Bougainville. Havieta was accompanied by one Rupert McGowan. Rupert McGowan was a banker - with the Hong Kong offices of the Jardine Fleming Bank. And Tim Spicer was now a shareholder in DiamondWorks with whom Freidland had much more than a passing association.

Spicer cooperated with the inquiry into the PNG "Sandline Affair" inasmuch as he answered questions of the judicial panel. However, he was anything but fully truthful. He managed to dodge some of the more serious questions and he offered up little in the way of precise details. During the PNG judicial inquiry however, he consistently lied and attempted to obfuscate the relationship of Sandline and Executive Outcomes. He made every effort to suggest that EO (UK) was a totally separate enterprise from EO (South Africa) even though Eeben Barlow was clearly and deeply involved in both.

Papua New Guinea Judge Warwick Andrew was having none of it. He stated that Spicer's claim that Sandline was separate from Executive Outcomes could not possibly be true and that even though Sandline and EO operated through a tangled web of front companies and ownership, they all came together at one particular spot - and that spot was occupied by Tony Buckingham, Simon Mann and Eeben Barlow.

What should be evident at this point is that the operators of these mercenary armies are quite prepared to go to any length to get what they want and hide the truth. Lies, distortion and subterfuge are all a part of the greater game.

Even more obvious however, is that these mercenaries are not satisfied with a simple payday from the highest bidder at the end of a dirty little war. That's how the mercenaries of old went broke. These guys are much more savvy. They expect a permanent stake in the country from the side they choose to support providing them with long term income and expanding wealth. For the most part they won't even consider going into a country unless it has substantial resource wealth which they can plunder. In that sense, backers and investors in their adventures, like Mark Thatcher, aren't in for a penny. The idea is to violently create an environment which will produce a massive return on investment. The risk is that it doesn't work out, as in Papua New Guinea or, more recently, Equatorial Guinea.

We're not finished with Tim Spicer. Before he left Sandline International he managed to get himself tangled up in an even more spectacular mess which ran afoul of the UK government, the United Nations, involved a mega-fraudster living in Canada and, by association, a Canadian member of parliament.

Of course, Buckingham, Mann and Barlow, along with a few others will round out the entire story.

(Part One is here)
Posted by Dave at 14:19 Recommend this Post