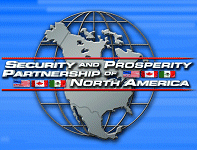 With the April 21 SPP leaders' summit looming on the still devastated New Orleans horizon, suddenly all the usual deep integration players are "North Americans" looking for the next new and improved incarnation of the SPP.
Why? Well because we apparently ruined the last one.
Barbara Yaffe, Vancouver Sun :

"Canada-U.S. efforts to resolve post-9/11 border problems plaguing North America's economy have fallen victim to conspiracy theories.
The Security and Prosperity Partnership, launched in 2005, is so misunderstood by the public and so discredited by opposition groups it should be relaunched and rebranded.
That's the view of Simon Fraser University political scientist Alexander Moens who has just completed a study of the SPP for the Fraser Institute. Moens asserts "the time has come to rebrand the talks and give them a clear mandate."

In a not very remarkable coincidence, this is also the view of the US right wing think tank Hudson Institute in their study, "Negotiating North America : The SPP" : who note that due to "xenophobes who fear fictitious superhighways" ... "it may ultimately be necessary to re-design and re-launch a new process to take up the work of the SPP under a new acronym."
Happily Moens has come up with one already:

"He's calling for the SPP to be replaced by NASRA, which stands for a North American Standards and Regulations Area. It "would include further economic integration beyond free trade but not political integration."

North American Standards and Regulation Area?
Good god man but that's a lame-ass name.
Would it have killed you to call it the N.A. Standards and Regulation Anschluss?
Moens attended the Network on North American Studies in Canada conference in Vancouver in March, where he chaired a presentation from a book project entitled "The North American Experiment".
NNASC, according to their website, is "a new initiative between Canada and the U.S., in partnership with leading universities, government agencies, think tanks and civil society. It is a unique private sector-public sector partnership"
Another presentation at the same conference was "Managing Shared Resources Across North American Borders" chaired by Rick Van Schoik of Arizona State University who is also a director of The North American Center for Transborder Studies.
In a recent essay "North America's Forgotten Agenda : Getting Development Back on Track", he lists among his key recommendations : "Implement a North American security perimeter".
Van Shoik will head ASU's participation in the Dept of Homeland Security's new $15M "Center of Excellence for Border Security and Immigration" :

"The establishment of the center by the U.S. Department of Homeland Security follows more than two years of work assembling a team of U.S. universities, Mexican and Canadian institutions government agencies, technology companies and national laboratories."

Did I mention this Vancouver conference was funded in part by Dept of Foreign Affairs and International Trade Canada and that they also participated in Van Shoik's session?
On March 29 NNASC held a panel discussion "Bridging the North American Divide From Economic Integration to Community" in San Francisco, featuring Dan Schwanen from the Center for International Global Innovation. In his essay "North American Integration Post Bush", Schwanen admires the success of the Dec 2001 Smart Borders initiative and proposes a "Smart North American Economy" within a "North America that badly needs rethinking".
See what I mean? It's all North America all the time in the tanks.
And finally in Tuesday's Financial Post ,ubiquitous professional Canada slaggers Michael Hart and Bill Dymond from Carleton University quote from their C.D. Howe Institute paper in which they advise dropping the SPP in favour of a whole new agreement :

"What Canada needs is a trade policy that recognizes the increasing importance of global value chains and the critical role of Canada-U.S. integration in gaining full benefit from their exploitation...
The only cost that would arise is political : in Canadians' exaggerated preoccupation with ephemeral concepts of sovereignty and nationhood."

Fuck you, Michael "Canada blew it!" Hart : NAFTA and FTA negotiator, former official at the Dept of Foreign Affairs and Int. Trade, and sometime deep integration teacher at the North American University.
Too bad we had you defending our 'exaggerated preoccupation with ephemeral concepts like sovereignty and nationhood' when you were our voice at NAFTA.
But no worries, as Barbara Yaffe reassures us with these soothing words :

"Conspiracy theorists should recognize that the governments directing the SPP are separate entities, with politicians looking out for their own respective national interest.
No Canadian government interested in reelection is going to sell out to U.S. interests on border policy."