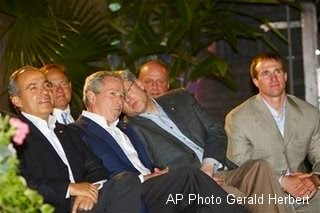 LuLu posted this photo from the Three Amigos Summit and commented:

"It looks like Big Daddy just doesn't know how to quit Dubya.
Eewwwwwwwww"

Bad LuLu.
That comment is exactly the kind of gratuitous scurrilous hyperbole the main scream media is always slagging the blogosphere for. Furthermore....
Hang about. What's this from CTV?
"Latest : Three amigos summit :
CTV News: Robert Fife with more from the summit
" Prime Minister Stephen Harper praised outing US President George Bush Monday to start the "Three Amigos Summit"
Sorry, LuLu, I didn't realize you had already had Harper's endorsement on that "outing" thing.
Carry on.
(And everyone else go look quick before they fix it) 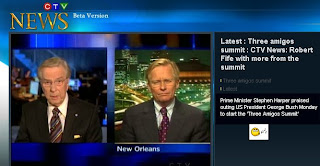 Email ThisBlogThis!Share to TwitterShare to FacebookShare to Pinterest
Labels: bush, conservatives sure are funny, harper, Steve