The Skinny On Fashion Week 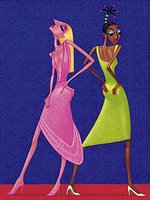 It's fashion week in Madrid next week. As fashion extravaganzas go, Madrid is a relatively small one. At least, so I'm told. The only fashion event I've ever attended involved Basset Hounds and various Scottish tartans. The models, when they could be made to strut their stuff on the catwalk, provided something of a spectacle when the full-cut McLaren tried to hump the winter-weight Hunting McIntyre. But, I digress.

Past fashion weeks in Madrid have caused doctors and womens' rights groups to protest at the ridiculously low weight of some of the models. That promted the local Madrid event organizers to take action. They are banning skinny models from the catwalk.

There is a problem. It's called Body Mass Index and if it's too low health problems are quite likely to ensue.

The organisers of Madrid Fashion Week have announced that they are banning skinny women to develop a more healthy image for the event this month. If any very skinny models do turn up, they will be classed as unhealthy and in need of medical help.

Spain's top model, Esther Canadas, has a reported BMI of only 14. The UN World Health Organization puts 18.5 as the minimum BMI of a healthy woman. Anything below that and the woman is at risk for some serious health problems. Many nutritionists, however, suggest a healthy BMI in women is between 19.1 and 24.9, an upward difference of 1.3 lbs per square meter of body size from the UN/WHO scale.

Madrid city council, which sponsors the fashion week, has ordered that every model on show must have a body mass index (BMI) of at least 18. Models who are 5ft 9in (1.75m) tall must weigh a minimum of 123 lbs. (56 kg).

What will Madrid regional council do with models who do not meet the minimum BMI?

Almost a third of the women lined up appear to have been barred. The council promised that a nutritional expert would be on hand to check every model taking part in the shows, and that any woman found to have a BMI of below 16 would receive medical treatment.

What kind of medical treatment? A bag of cookies?

While Madrid may be a small fashion event, Milan, Italy is a major one, and the Spanish initiative is reaching the ears of Milan's city leaders.

Milan's mayor, Letizia Moratti, told a newspaper this week that she may bring the Spanish ban on underweight models to Italian shows.

But, despite the good intentions of the regional governments, it's difficult to believe they've levelled their sights on the proper targets.

“Why do casting agents persist in using 15 and 16-year-olds to sell clothes to women in their thirties and upwards?”

To add to the unfairness of it all is the fact that male fashion models are expected to present themselves with a highly fit body and a BMI which stands at the top of or beyond the "healthy" scale. Some male models carry 20 lbs. more muscle than the average male body type. It can be expected that at least a few of them achieve that using dangerous anabolic steroids. There are no doping tests on the catwalk - for male or female models.

Twiggy led the charge of the under-nourished look in the 1960s at the age of sixteen, being promoted by her manager/boyfriend, hair designer Justin de Villeneuve. She went on, after breaking with de Villeneuve, to develop a successful film and television career. And, once she was out of her teens, her BMI appears to have increased.

The waif-like appearance demanded of today's female fashion models has always baffled me. For the longest time I would wonder why a woman would do that to herself. When it finally sunk in, I was a little embarrassed. While the willowy body is sold as healthy and alluring, it is actually sending quite a different message:

Vulnerable, pubescent, helpless and in need of a protector.

The picture female models are expected to present is that of a woman, wearing expensive clothes with a body which can be snapped like a twig; submissive, by virtue of her lack of physical strength. The perfect trophy for a powerful man.

If the hosts of major fashion events want female models to bring their BMIs into a more healthy range they will have to address the problem differently. Putting models out of work in an attempt to admonish fashion designers and casting agents is an act of meaness which further victimizes the victim.
Posted by Dave at 17:46 Recommend this Post