And the season begins

I usually keep an eye on the weather. It's a habit, and when I'm at sea, it's a professional responsibility... which I take very seriously. Having had my butt kicked once too often by the forces of nature I am all too aware that it doesn't matter what's happening in the halls of power in any of the world's capitals - a sudden drop in barometric pressure can ruin the day of even, well, a superpower.

Tropical depression #1 was announced by the US National Weather Service early yesterday. That's no big deal. They just happen and it means winds in the range of gale force, usually with a lot of accompanying rain.

Until the pressure drops even further.

This appeared on this morning's GOES East satellite rendering. (click to enlarge) 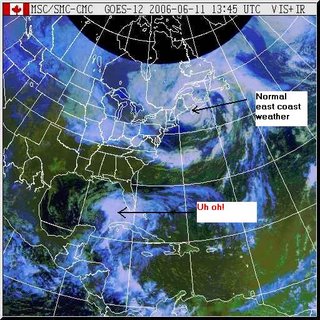 And just a little while ago the US National Hurricane Center issued this:

INTERESTS IN THE EASTERN GULF OF MEXICO SHOULD MONITOR THE PROGRESS OF THIS SYSTEM. FOR STORM INFORMATION SPECIFIC TO YOUR AREA...INCLUDING POSSIBLE INLAND WATCHES AND WARNINGS...PLEASE MONITOR PRODUCTS ISSUED BY YOUR LOCAL WEATHER OFFICE.

REPORTS FROM AN AIR FORCE RESERVE UNIT HURRICANE HUNTER AIRCRAFT INDICATE THAT TROPICAL DEPRESSION ONE HAS STRENGTHENED INTO A TROPICAL STORM.

Just this: The predictions were that it would never reach Tropical Storm strength.
Posted by Dave at 07:44 Recommend this Post