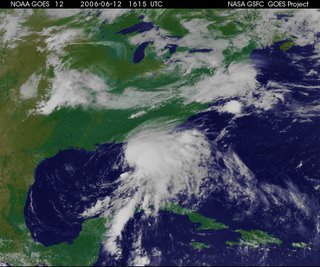 What started out as Tropical Depression #1 of the 2006 Caribbean storm season has progressed to become Tropical Storm Alberto - and it's still growing. From the US National Hurricane Center, issued a couple of hours ago:

AT 10 AM CDT...1500 UTC...A HURRICANE WARNING HAS BEEN ISSUED FOR THE GULF COAST OF FLORIDA FROM LONGBOAT KEY TO THE OCHLOCKONEE RIVER.

A HURRICANE WARNING MEANS THAT HURRICANE CONDITIONS ARE EXPECTED WITHIN THE WARNING AREA WITHIN THE NEXT 24 HOURS. PREPARATIONS TO PROTECT LIFE AND PROPERTY SHOULD BE RUSHED TO COMPLETION.

MAXIMUM SUSTAINED WINDS HAVE INCREASED TO NEAR 70 MPH...110KM/HR...WITH HIGHER GUSTS. ALBERTO HAS THE POTENTIAL TO BECOME A HURRICANE WITHIN THE NEXT 24 HOURS.

This first depression of the season was not expected to reach storm force in the initial predictions. Now it's starting to look like a hurricane is entirely possible.

In terms of hurricanes, this is not likely to be a big one, however it is packing a lot of moisture and it is gaining unexpected strength. The greatest danger so far is from flash flooding. It's movement is a little out of the ordinary in that it moved further north than originally expected.

The movement of the storm seems to be a bit disorganized and there is still a good possibility it will lose energy as it crosses Florida. The latest GOES East satellite photo shows a very loose system, with a fairly wide path.

Update 2100z: Tropical Storm Alberto has leveled off and is less likely to reach hurricane proportions. This forecast discussion issued by the US National Hurricane Center suggests winds have reached their probable sustained levels and the system has left the area of the highest oceanic heat content in the Gulf of Mexico.

Alberto will make landfall in the southeastern United States, perhaps as early as tomorrow morning. That should make for some interesting newscasts as the fools who are attempting to report the strength of winds and the tidal surges stand out in the middle of it.

Tidal surges of 8 - 10 feet are expected in some areas.

There is a remote possibility that the storm could increase to hurricane strength during the diurnal convective maximum on Tuesday.

My bet would be that Alberto doesn't get much stronger and is likely to ease off from now until it's energy is spent.
Posted by Dave at 09:28 Recommend this Post