Owelympics : Yea, though I walk through the valley of the shadow of debt ... 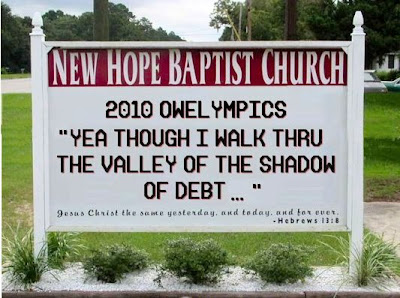 Church Sign Generator - from the old internets
A Global TV news story on the International Olympic Committee's elevation to a special seat at the United Nations carried the headline :
Canada declines to sponsor UN resolution on IOC observer status .
Now why would Canada decline? 25 other nations sponsored it.
Over at Bread 'n Roses, Toe suggests this may have had something to do with it:

A memoir, written by a Chinese sports official, tells the tale bluntly:
Beijing sealed its bid for the 2008 Summer Olympics by trumping Toronto in backroom deals.
Behind the scenes, Beijing officials told European members of the International Olympic Committee that China would support the candidacy of Belgium's Jacques Rogge for IOC president in return for their support of a Games in China, according to retired sports minister and president of the Chinese Olympic Committee, Yuan Weimin.

The scheme worked to perfection. Not only did the Chinese capital get the 2008 Games, but Rogge was elected IOC president and not a single member of the IOC executive board was elected from Canada or the Americas.

CTV : "The alleged deal would have impacted Canada as Toronto bid against Beijing for the Olympics while Montreal's Dick Pound was running against Rogge."
Speaking to the UN General Assembly on behalf of Canada today, John Furlong, head of the Vancouver Organizing Committee for the 2010 Games, said :

"Canada recognizes the power of sport to build sustainable communities, to advocate for equality, to foster social inclusion among young people and to contribute to a global culture of peace."

Hey, John, glad to hear you brought up 'sustainable communities' and 'equality' and 'social inclusion' and all.
Maybe while you're there, you might mention to our Permanent Mission to the UN that despite our using First Nation art and motifs to advertise the 2010 Games, sell Owelympic swag, and decorate the athletes' outfits and medals, Canada has yet to sign the UN Declaration on the Rights of Indigenous Peoples . Now it's just us and the US.
Thanks.
Posted by Alison at 01:24 Recommend this Post

Email ThisBlogThis!Share to TwitterShare to FacebookShare to Pinterest
Labels: 2010 olympics, government by for and of the 2010 olympics