Maybe Winter is useful, after all 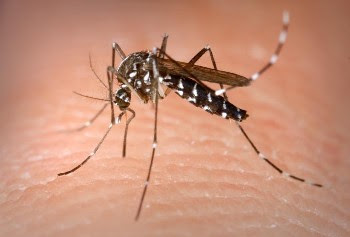 THE NATIONAL is an interesting site out of Abu Dhabi, with a report by Tom Scocca about the "Bites of passage", the progressive world-wide spread of the Asian tiger mosquito.

In the past few decades, the Asian tiger mosquito has travelled from its natural home in Southeast Asia to the ends of the earth, becoming one of the world’s most invasive species.

Over the course of the past two or three decades, however, the Asian tiger mosquito has become considerably, prodigiously more mobile. It has circled the planet, emerging in Trinidad in 1983; Mexico in 1988; France in 1999; Cameroon in 2000; Nicaragua, Greece, Israel and Switzerland in 2003. It has colonised North and South America, Africa, and Europe, until it has become a great nuisance in Brazil, Albania, Nigeria, Mexico and Italy – “the most invasive mosquito in the world”, a team of researchers wrote in 2007, in the journal Vector-Borne Zoonotic Disease. The mosquito from the Southeast Asian jungle is also now a great nuisance in Trenton, New Jersey – the greatest present-day mosquito nuisance in a wetland state whose history is written in waves of mosquito infestation.

Living things evolved to settle into this new niche, whether humans had invited them or not: the house mouse and the house sparrow, the bedbug and cockroach, the dust mite, the housefly, the Norway rat and the pigeon. With them came their own predators, parasites and diseases. Humanity has not subdued nature so much as been infiltrated by it, co-opted to generate food and water and shelter to an entire roving ecosystem.

For the Asian tiger mosquito, the benefits of human settlement include a near-limitless supply of cavities and containers of every shape and material, all of them possible breeding reservoirs: styrofoam cups, plastic bottles, metal roof gutters, ceramic saucers.

Ah, packaging. As Walt Kelly observed, we have met the enemy, and he is us.