Peter MacKay can focus on as much "positive" as he wants. It won't change the reality of Afghanistan. He got a lesson when, as his plane was preparing to take off a couple of low-tech incoming rockets delayed his flight.

Foreign Affairs Minister Peter MacKay spent a lot of time talking about provincial reconstruction in Kandahar on Monday but the focus as he wrapped up his two-day visit here kept sliding back to security and the Taliban.
That focus became even sharper late Monday afternoon as two rockets were fired at the base just as the minister was set to leave for Pakistan. MacKay's flight remained on hold for about 15 minutes before finally taking off.
"Well, I prefer to focus on the positive but I'm not (going) to be naive. There are practical challenges that we still face, not the least of which is the movement of insurgents who come across the border,'' MacKay acknowledged at a news conference about 45 minutes before the attack.

(Emphasis mine). That's pretty hard to believe. MacKay is naive. He's completely out of touch with reality. Proof? Right in the picture. 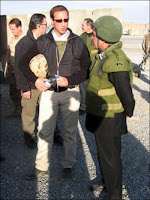 MacKay is in a hot combat zone. That hunk of kevlar he has tucked under his right arm is an essential part of personal protection. You'll note that Afghanistan Foreign Minister Rangin Dadfar Spanta is wearing his helmet and a full piece of body armour.

I have no idea what's going through MacKay's mind during that photo-op. Is it Mr. Macho proving he ain't afraid? Is it just plain stupidity? Is he afraid of messing up his hair?

Whatever it is, it's a bad example and a demonstration of how dumb he really is. Kevlar brainpots aren't the most comfortable piece of headgear on earth but, something I'm sure MacKay doesn't get, it's not a hat. I wonder, if MacKay were touring a construction site where the requirement was for steel-toed boots and hard-hats if he'd ignore the industrial safety regulations. I know the characters in this TV series are constantly taking their helmets off after an engagement. That's not reality and MacKay's apparent disregard for the appropriate safety apparel is typically arrogant - and just plain stupid. I guess IOKIYAC* applies here.

MacKay is now off to Pakistan to have a "blunt" conversation with Musharraf about the Taliban hiding out in that country and slipping into Afghanistan. He might want to recall this first.

*It's OK If You're A Conservative. Apologies to Atrios who originally coined IOKIYAR.
Posted by Dave at 10:01 Recommend this Post