Wish you were here 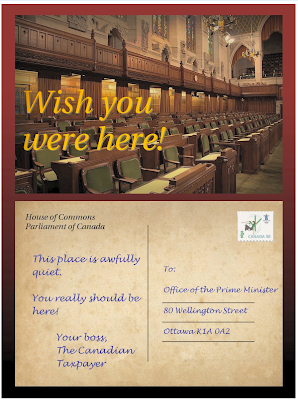 Via Impolitical, who suggests a companion pic of the opposition parties showing up on Jan 25th as originally scheduled to fill the opposition benches would make a very strong statement against the rogue PM.

"Last year ministers threatened to go over the head of the de facto head of state if Governor General Michaëlle Jean allowed a coalition of "Liberals, socialists and separatist" to use their Commons majority to topple his minority.

[That would be Baird here]

This winter Harper is essentially making the argument that Parliament is getting in the way of his government governing."

Responding to news of the prorogation in his New Years letter, Michael Ignatieff writes :

"Canadians are rightly starting to wonder if Conservatives intend to shut down government whenever things don’t go their way.

I’ll be spending the first few months of the year reaching out, travelling from coast to coast, holding town-hall meetings, web forums and small gatherings to hear from Canadians first-hand ...

On March 26 to 28, 2010, some of Canada’s leading progressive thinkers and doers will gather in Montreal for a conference entitled Canada at 150: Rising to the Challenge. They will be part of a national conversation about the Canada we want to be in 2017 when we celebrate our 150th birthday..."

Dear Iggy, Wish you were here too.
.
Posted by Alison at 09:33 Recommend this Post