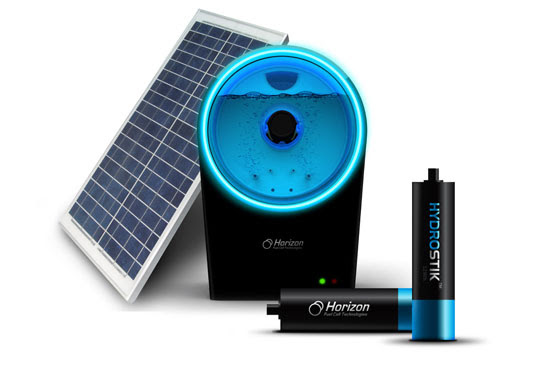 WE HAVE AN ABOMINATION for a government, and it's really pissing me off.  So, I'd like to present something that looks really neat and clever, as a break from the ghastliness of Stevie.

It seems that a Singapore outfit, HORIZON FUEL CELL TECHNOLOGIES, has developed some really practical hydrogen fuel cells that people like you and me can actually afford. Not only that, but you won't need cryogenic H2 storage and an account with your local compressed gas supplier. Their stuff looks neat, too.

Horizon's HYDROPAK provides significantly more energy stored at a lower cost, reduced weight, and smaller size then today's existing battery-based portable emergency power devices. Its recyclable dry fuel cartridge overcomes the logistics and supply infrastructure for hydrogen, since the HydroPAK system is able to generate its own hydrogen when needed, once users add water to the cartridge. No hydrogen is ever stored in the HYDROPAK or its cartridges since the HYDROPAK produces hydrogen on request. When the system is turned off, there is no hydrogen in the system.

The unique HYDROPAK water-activated cartridge system:
Provides long shelf life when stored dry, with no self-discharge
Can run indoors with no harmful emissions (no carbon monoxide, no carbon dioxide)
Is quieter, lighter and smaller than generators
Stores significantly more energy than batteries at a lower cost and less weight
At 30W-50W the HydroPAK is the world's lowest cost fuel cell portable device

The suggested retail price has been set at $650/unit initially, and $40 for each cartridge.