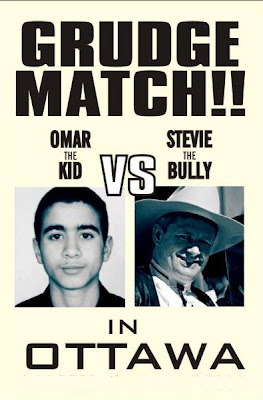 THE GLOBE HAS AN INTERESTING TAKE on the Supreme Court's decision, and Stevie isn't gonna like it . . . according to Kirk Makin,

In an 9-0 ruling this morning, the Court said that Canada violated Mr. Khadr's Charter rights by participating in illegal interrogation methods which included sleep deprivation.

It stressed that the constitutional breach is ongoing and “continues to this day.”

However, the court said that before stepping in to dictate a Canadian response on a sensitive question of foreign policy, the federal government must be given a chance to rectify Mr. Khadr's plight.

But should the government fail to act, the court warned that it has the power to move more overtly to aid Mr. Khadr.

It's not easy, being Stevie.