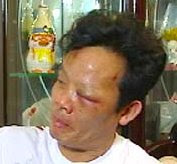 Vancouver's finest responded to a domestic dispute call by going to the wrong suite at 2am and beating the crap out of the guy who answered the door. They were in plain clothes. Yao Wei Wu does not speak English. He said he did not resist because the men had guns.

"Mr. Wu was taken to hospital where he was treated for bruises to his head, waist and knees and fractured bones around his left eye."

Vancouver Police chief Jim Chu has personally apologized to the 44 year old man. There will be an investigation.

It's horrible I know. But I wanted to point out the media headlines.

Notice anything about those headlines? What they all imply is that it's the wrongful arrest that's the problem, not the fact the Vancouver Police beat someone up regardless of whether they thought he was the right guy or not.

Thank you, CBC. And to commenters below the story, mostly all 300 of whom seem to get it.

Meanwhile, we're still waiting to find out if anything will be done about the off-duty cops who beat up a newsie a whole year ago.

Update : This is cause for a wee bit of hope ... VPD actually admits first response was to spin it :

VPD spokesperson Jana McGuinness stated yesterday that the man, who was not involved in any crime and was mistaken for someone else by police, “resisted by striking out at the police and trying to slam the door.”

Today, VPD Chief Jim Chu stepped back from those allegations, saying, “I want to make it perfectly clear this morning that we do not stand by that statement.”

Email ThisBlogThis!Share to TwitterShare to FacebookShare to Pinterest
Labels: police brutality, the news media falling through their own assholes and strangling themselves.