The horror, the horror

THE NY TIMES has a disturbing article by Nicholas Kristoff, titled "Orphaned, Raped and Ignored", about the current state of things in the Congo. It's a horror-show, a 21st century Heart of Darkness, and it's ignored by just about everybody. How bad is it?

A peer-reviewed study found that 5.4 million people had already died in this war as of April 2007, and hundreds of thousands more have died as the situation has deteriorated since then. A catastrophically planned military offensive last year, backed by the governments of Congo and Rwanda as well as the United Nations force here, made some headway against Hutu militias but also led to increased predation on civilians from all sides.

Human Rights Watch estimates that for every Hutu fighter sent back to Rwanda last year, at least seven women were raped and 900 people forced to flee for their lives. “From a human rights perspective, the operation has been catastrophic,” concluded Philip Alston, a senior United Nations investigator.

5.4 MILLION people have been killed! 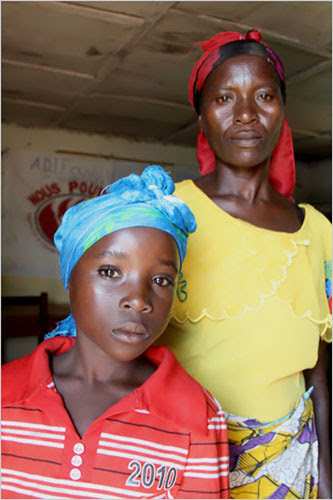 Chance Tombola, 9, and her aunt, Jeanne Birengenyi, 34, both among the innumerable rape survivors in the war in eastern Congo. Chance's parents were killed in the war, as was Jeanne's husband. Given the stigma surrounding rape in Congo, they showed tremendous courage in speaking about their experiences.

Email ThisBlogThis!Share to TwitterShare to FacebookShare to Pinterest
Labels: congo