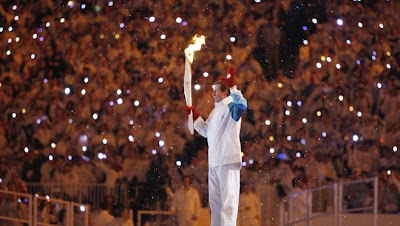 U.S. citizen Wayne Gretzky lit the torch and we television viewers were treated to a couple of hours of modern dance and extremely impressive stage effects to mark the opening of the Vancouver games. Nicely done, though neither of my kids would believe kd Lange is a woman at first. I liked Shane Koyczan's poem, but he should have started working on his beard a little earlier or shaved. And apparently Canada was settled by tattooed fiddling Celtic barbarians - who knew?
Burning stupid! Burning stupid! 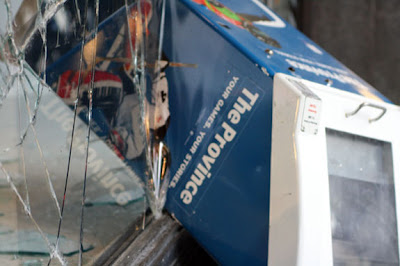 And here's a newsflash for "Blayze" the masked protestor who speaks to the press at the end of the video here: "The next level" of a peaceful protest is not smashing windows and trying to provoke the cops and it isn't "the perogative" of the some self-important douchebag in a black hoodie and bandana to make the sensible people who are trying to make a point in a civilized way look bad just because he thinks he's a revolutionary who is going to bring racist exploitive capitalism to knees by throwing newspaper boxes through shopfronts. Dude, your friends are not activists, they are assholes.
These stupid self-proclaimed anarchists should be aware that The Man has 15,000 troops at his beck and call, 15,000 cops, soldiers and rent-a-cops who would probably like nothing better than to have a quiet two weeks, but who aren't above knocking the crap out of a whole bunch of people who don't deserve it because of the anti-social antics of a few shit-for-brains who think smashing windows serves the cause of social justice.
And yes, I have heard the theories about agent provocateurs that are already making the rounds. Those taking part in the legitimate protests won't be lead astray by such people. If you are at a protest and someone starts talking about "getting" the cops, or starts picking stuff to throw, the best thing to do is tell them to cut it the hell out and grow the hell up. There is not a crowd of protesting civilians anywhere in the world that is going to win a street battle against prepared, trained and well-armed cops, so there is no point at all in starting a fight. And trying to provoke a response by the police so that the news cameras can get footage of the "true nature of the fascist oppressors' brutality" is idiotic and is going to get the wrong people hurt.
There are many legitimate complaints to be made about the Vancouver games and the Olympics in general, but smashing windows and putting bystanders in danger is not the way to make the statement that needs to be made.
Posted by Unknown at 19:15 Recommend this Post