The Revolution Is Being Streamed 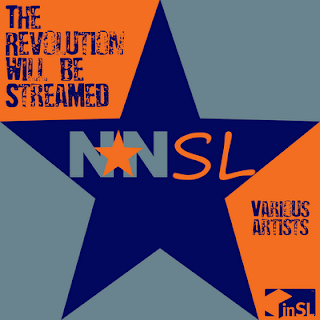 I don't want to hijack the blog to sell stuff, but if you have a look over at the Woodshed, you can find out how, for less than ten bucks, you can score some awesome music and help progressive politics. The Revolution Will Be Streamed is now available for sale.
As noted in an earlier post, this is an album of MP3 I've collected from various artists who have donated their creative energy, talent and time to help out Netroots Nation with its online activities. I'm not making a dime, it all goes to pay for things like streaming the speeches and workshops at the Netroots Nation convention online in Second Life.
There is very little in the way of overt politics on the album, just a lot of good music. There's a little bit of everything: Folk, Roots, Salsa, Blues, Comedy, funky pop, alt-country, gothic tinged rock, even some reclaimed '80s dance pop.
And if you just want to listen, you can tune into Radio Woodshed, where I'll be streaming the entire album in constant rotation over the next few days.
I should point out that I have no official affiliation with Netroots Nation and they have no official involvement with this project. I, along with some other like-minded people, took on this project because we think Netroots Nation does good work and wanted to raise some money for them. Any errors, transgressions or omissions are mine, not theirs.
Posted by Unknown at 06:36 Recommend this Post

Email ThisBlogThis!Share to TwitterShare to FacebookShare to Pinterest
Labels: music, protest songs, The Revolution will be streamed