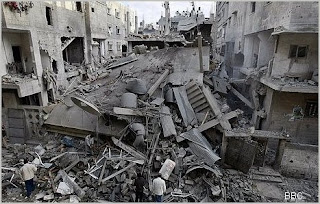 Six children were killed when this mosque was levelled, one of several mosques hit, along with schools, hospitals, government buildings, police stations, television stations, prisons and the women's wing of the Islamic University.
Israel has extended its naval blockade of Gaza from six nautical miles to 20 nautical miles, preventing humanitarian aid and protest vessels from trying to break the siege.
Foreign reporters and Red Cross medical emergency teams have been denied access to Gaza.
Power lines have been cut. One and a half million people lack water, fuel, food and medical supplies.
Tzipi Livni, the Israeli foreign minister, says there is no crisis.
The US has just blocked a UN Security Counsel ceasefire resolution.
Chris McGreal writes in The Observer from Jerusalem about the PR campaign to ensure that Israel's war was seen not in terms of occupation but of the west's struggle against terror and confrontation with Iran.

"Dan Gillerman, Israel's ambassador to the UN until a few months ago, was brought in by the Foreign Ministry to help lead the diplomatic and PR campaign. He said that the diplomatic and political groundwork has been under way for months.

"This was something that was planned long ahead," he said. "I was recruited by the foreign minister to coordinate Israel's efforts and I have never seen all parts of a very complex machinery - whether it is the Foreign Ministry, the Defence Ministry, the prime minister's office, the police or the army - work in such co-ordination, being effective in sending out the message."

Hand in hand went a strategy to remove the issue of occupation from discussion. Gaza was freed in 2005 when the Jewish settlers and army were pulled out, the Israelis said. Israel portrayed Hamas as part of an axis of Islamist fundamentalist evil with Iran and Hezbollah. Its actions, the Israelis said, are nothing to do with continued occupation of the West Bank, the blockade of Gaza or the Israeli military's continued killing of large numbers of Palestinians since the pullout.

Lobby groups, such as the British Israel Communications and Research Centre (Bicom) in London and the Israel Project in America, were mobilised. They arranged briefings, conference calls and interviews. The Israeli military posted video footage on YouTube. Israeli diplomats in New York arranged a two-hour "citizens' press conference" on Twitter for thousands of people. At the same time, Israel in effect barred foreign journalists from witnessing the results of its strategy.

Continued...
Cross-posted at Creekside
Posted by Alison at 03:11 Recommend this Post