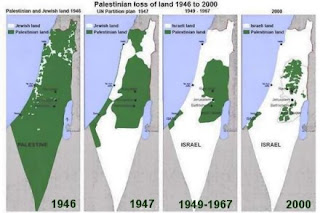 Maps of Palestinian loss of land, 1946 to 2000.
Israel is about the same size as Vancouver Island; Gaza, that little green strip on the coast, is a little more than twice the size of the District of North Van, or a little smaller than Seattle.
.
Yesterday Canada stood alone in voting against a UN human rights resolution "adopted by a roll-call vote of 33 in favour, one against and 13 abstentions" which :

"strongly condemned the ongoing Israeli military operation in Gaza, which had resulted in massive violations of human rights of the Palestinian people, and demanded the occupying power, Israel, to immediately withdraw its military forces from Gaza".

The resolution also called for

Full UN text here.
Yes it was heavily weighted against Israel, causing European nations and others to abstain from the vote, but Canada's stated reason for voting against it merely repeated the US/Israeli line that Israel didn't start it (italics:mine):

"MARIUS GRINIUS (Canada), speaking in an explanation of the vote before the vote, thanked the Palestine delegation for its consultations, but said the draft text still failed to clearly recognize that rocket fire on Israel had led to the current crisis. It also used unnecessary, unhelpful and inflammatory language.
Canada therefore called for a vote and would vote against the resolution."

According to Reuters : "The resolution, whose wording diplomats said had been softened at the request of Palestinian envoys in an effort to get a consensus in the Council, was opposed outright by Canada."
So what did Hamas want?
Khalid Mish'al, head of the Hamas political bureau, speaking in Damascus on January 11, 2009 :

"Concerning us, we want the immediate and complete withdrawal of Israeli forces from Gaza and the lifting of the unjust siege on Gaza that has led to the current situation.
Our other request is the opening of all border crossings including the Rafah border crossing.
We, with an open mind, will deal with any initiatives and decisions based on these three requests.
Therefore, we will not accept any negotiations for a truce in the light of and under the pressure of a military campaign and siege.
Let the military campaign stop, let the Israelis withdraw, and let the rights of our people be admitted to, let them recognize our rights to live without a siege and closed border crossings, just like other humans, then we are ready to discuss a truce, just like we did before.
We will not accept a permanent truce, because it will take the right of resistance from the Palestinian people. The resistance is against occupation and military campaigns and therefore as long as occupation exists, resistance will too…"

Canada's Dept of Foreign Affairs , via The Star :

"The resolution wholly failed to acknowledge Hamas's continual rocket attacks on Israel that brought about the current crisis, and ignored a state's legitimate right to self-defence," a spokesperson said in an email." [apparently without irony]

"A four-month ceasefire between Israel and Palestinian militants in Gaza was in jeopardy today after Israeli troops killed six Hamas gunmen in a raid into the territory. Hamas responded by firing a wave of rockets into southern Israel, although no one was injured.
Ehud Barak, the Israeli defence minister, had personally approved the Gaza raid, the Associated Press said. The Israeli military concluded that Hamas was likely to want to continue the ceasefire despite the raid."

Back to Foreign Affairs :

"Canada remains deeply concerned about the ongoing hostilities ... and encourages all diplomatic efforts to achieve an immediate, sustainable and durable ceasefire. But first and foremost, Hamas's rocket attacks must stop so that a ceasefire can be realized."

In May last year, a month before he received the B’nai Brith International President’s Gold Medallion, Stephen Harper said :

quite as if intelligent people would be unable to tell the difference.
In October 2007 Stockwell Day and Israeli Public Security Minister Avi Dichter signed an interim mutual cooperation agreement on homeland security "to enable cooperation in the fields of combating terror and border security".
Dichter laid out guidelines for a Canadian-Israeli security cooperation similar to the Israel US Homeland Security Pact he signed in February in Washington DC. to the Canadian public security committee. The Canada Israel Declaration of Intent was signed on March 23, 2008.
Cross-posted at Creekside
Posted by Alison at 15:04 Recommend this Post