While most of Canada celebrates Canada Day, in one province this date holds a different significance. In Newfoundland, this is Memorial Day, a commemoration of one of the greatest human disasters to ever befall that independent British dominion.

On this day 90 years ago, the armies of the British Empire, along the line of the Somme River in France, stepped out from the cover of their trenches and into one of the worst slaughters in military history. The infantry assault against the German positions on the Somme started just after breakfast on the 1st of July, 1916. By sunset of that day, approximately 60,000 Allied troops had fallen - 20,000 of them killed - something which remains a one-day record of losses to this day.

The armies of the British Empire were led by perhaps the most incompetent generals the British army has ever produced. General Sir Douglas Haig, a cavalry officer, planned the Somme offensive to break the German hold on the Somme and divert German resources from the Verdun region where the French were under intense pressure.

However, far from a surprise, an eight day heavy artillery barrage of German positions along the Somme alerted the Germans to an imminent attack. When the troops went over the top at 7:45 am the German Spandaus opened fire, each pumping 500 rounds per minute into the openings of the Allied barbed wire. Most Allied soldiers, ordered to walk shoulder-to-shoulder across 1000 yards of No Man's Land, fell before they reached the outer barbed wire of their own lines.

The Newfoundland Regiment, which on July 1st, 1916, mustered 801 officers and men, formed a part of the 88th Brigade of the 29th Division. This unit, at Beaumont Hamel, was expected to cross 5 kilometers of open ground and capture the German positions. The Newfoundland Regiment and the Essex Regiment were to take the trenches at Beaucort Road, approximately 600 to 1000 yards from the Allied trench line.

At 9:15 am the Newfoundland Regiment, after receiving confused and unclear orders, went over the top.

The Essex Regiment was unable to advance because of huge numbers of dead and wounded soldiers in their front. The friendly artillery covering fire failed to materialize. The Newfoundland Regiment had no protection at all on either flank, nothing to distract or deter the enemy in front of them and faced a withering German crossfire from Spandau machine guns.

The Newfoundlanders were cut down at their own barbed-wire gates. The very few survivors who actually made it to the German lines were horrified to discover that the artillery barrage had not damaged the German barbed-wire. Worse, this was known by the British commanders and had not been passed on to the leaders in the trenches. Thus, of the Newfoundlanders who actually reached the German wire, most were killed then, entangled and trapped.

By 9:45 am, less than 30 minutes after it started, the Newfoundlanders' attack at Beaumont Hamel was over. The attack had failed. Lieutenant-Colonel Hadow, observing the attack from a forward position was ordered to muster survivors and make another assault. The order was eventually countermanded but only after Hadow had insisted that there was nobody to muster.

That night the dangerous job of recovering the wounded started. Those who tried to crawl back to their own trenches became easy targets for German snipers. It took days to tabulate the losses. When the final roll was taken 710 Newfoundlanders, from a regiment of 801 men, would not answer their names. The 1st Newfoundland Regiment had been slaughtered into non-existence.

At home in Newfoundland the news was received with confusion and shock. Virtually everyone in Newfoundland had either a relation or a close friend among the casualties of 1 July, 1916. It would sear the minds of Newfoundlanders forever. No matter what this day was to anyone else, to Newfoundlanders this would be the anniversary of the day on which their regiment of proud and courageous young men fell. It would be underscored by the fact that, among Allied contributions, Newfoundland suffered the highest per capita loss of any British Empire force during the Great War.

The Danger Tree was the only tree left standing, though horribly disfigured from the battle fire. It was decided that those Newfoundlanders who made it into no man's land would make their way to that tree, where the next plan of advance would be decided upon. Sadly, as men gathered around the tree, the Germans aimed their fire right at them. After the battle, one of the largest concentrations of casualties - injured, dead and dying - was in the vicinity of the Danger Tree.

The Somme offensive, which was supposed to break initial German opposition in a one day 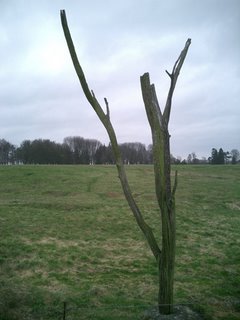 assault on 1 July lasted until 18 November 1916. Haig would demonstrate utter incompetence during the entire campaign. There were few victories and those which did occur were not followed-up. Haig and his staff consistently failed to consolidate and advance from gained ground.

Having learned nothing from the unbelievable slaughter of the first day of the offensive, incompetent and uncaring British commanders sent thousands more courageous soldiers to their graves. By the end of the Somme offensive in November 1916, after almost 5 months of fighting, the Allies had achieved an advance of well under 8 miles - and an unbelievable 600,000 Allied soldiers were dead.

The Somme offensive unleashed over two more years of an incomprehensible blood-bath. It would change warfare forever.

And, Newfoundland paid a horrible price.

So, yes, it's Canada Day. But in Newfoundland people gather and remember the Danger Tree where so many young Newfoundlanders lost their lives in a far away battle that, to this day, still leaves the descendents of the dead with a profound sense of loss.
Posted by Dave at 14:28 Recommend this Post