BAATHISM HAS BEEN a driving political force in the Middle East for decades, but according to an article on The New Republic, by Paul Berman, "Baathism: An Obituary", it seems that the movement is about to be nailed to its perch, so to speak, with the imminent collapse of its last adherents in Syria.

Baathism is one of the last of the grandiose revolutionary ideologies of the mid-twentieth century—an ideology like communism and fascism in Europe (both of which exercised a large influence on Baathist thinking), except in an Arab version suitable for the age of decolonization. Its champions came to power not only in Syria but in Iraq, in both cases in the 1960s; and the consequences were not of the sort that leave people unchanged. 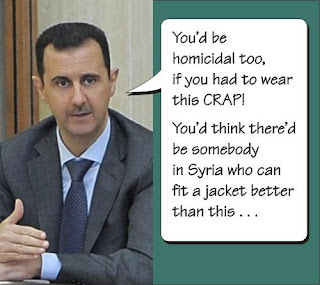 Now, while Bashar seems to be a rather unpleasant fellow, the collapse of the Baathist movement and its discreditation in the Middle East may have not-good consequences:

The political and cultural landscape of the Middle East, post-Baath, will be pockmarked by blighted zones that might otherwise have been a prosperous Iraq and Syria, if only the Baathist doctrine had not destroyed those countries. A cloud of intellectual bafflement and paranoia will hover overhead, consisting of the confused thoughts of everyone across the region who, in the past, talked themselves into supposing that Baathism was a good idea. And more than visible will be the triumphant zeal of Baathism’s principal rivals in the matter of grandiose revolutionary ideology—the champions of the single Middle Eastern millenarian doctrine still standing, once the Assad regime has finally gone. These will be the Islamists.

Yep, the Islamic Brotherhood and the Wahabbists may wind up being the real winners, in the near-term, the next 5 to 10 years. But as the 21st century passes and things like satellite dishes and the web have their influence, there will be changes — and surprises.
Posted by Edstock at 11:03 Recommend this Post

Look south, new forms of Bathism spring up, except its a fascist libertarian kind. I ask why did Obama throw the debate? Were fascist behind it.