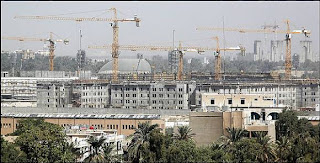 Fortress America in Baghdad : a 21 building embassy on 104 acres with a $1M projected annual budget just for upkeep of the shrubbery.

From today's Independent :
Revealed: Secret plan to keep Iraq under US control
Bush wants 50 military bases, control of Iraqi airspace and legal immunity for all American soldiers and contractors

"Under the terms of the new treaty, the Americans would retain the long-term use of more than 50 bases in Iraq. American negotiators are also demanding immunity from Iraqi law for US troops and contractors, and a free hand to carry out arrests and conduct military activities in Iraq without consulting the Baghdad government.

"The US is adamantly against the new security agreement being put to a referendum in Iraq, suspecting that it would be voted down. The influential Shia cleric Muqtada al-Sadr has called on his followers to demonstrate every Friday against the impending agreement on the grounds that it compromises Iraqi independence.
The Iraqi government wants to delay the actual signing of the agreement but the office of Vice-President Dick Cheney has been trying to force it through."

Immunity from Iraqi law for US troops and contractors?
Over half the Iraqi parliament have signed a letter sent to the US Congress :

"The majority of Iraqi representatives strongly reject any military-security, economic, commercial, agricultural, investment or political agreement with the United States that is not linked to clear mechanisms that obligate the occupying American military forces to fully withdraw from Iraq."

Well we've been hearing for weeks about this deal to finally give the US a legal basis for being in Iraq but today the US ambassador to Iraq attempted to quell fears about the permanence of a US military presence in Iraq, denying the bases would be permanent :

"It is not going to be forever," he told reporters at the State Department.

Apparently there is some kind of sliding scale of permanence with 'forever' at one end and 'continuing' at the other.
Posted by Alison at 12:32 Recommend this Post