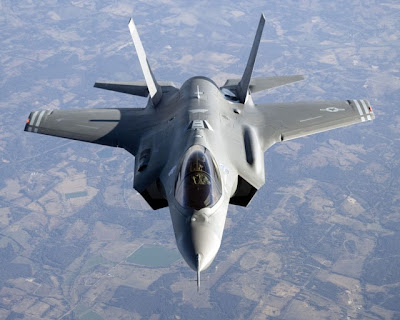 WIRED has a very interesting report by David Axe, "China, Russia Could Make U.S. Stealth Tech Obsolete". It appears that advances in electronics may make US stealth aircraft unable to operate in airspace where next-generation surveillance electronics exist.

It’s been a pillar of the U.S. military’s approach to high-tech warfare for decades. And now, it could become obsolete in just a few years.

Stealth technology — which today gives U.S. jets the nearly unparalleled ability to slip past hostile radar — may soon be unable to keep American aircraft cloaked. That’s the potentially startling conclusion of a new report from Barry Watts, a former member of the Pentagon’s crystal-ball-gazing Office of Net Assessment and current analyst with the Center for Strategic and Budgetary Assessments in Washington.

“The advantages of stealth … may be eroded by advances in sensors and surface-to-air missile systems, especially for manned strike platforms operating inside defended airspace,” Watts cautions in his 43-page report The Maturing Revolution in Military Affairs (.pdf), published last week.

That could come as a big shock to the U.S. Air Force, which has bet its future on radar-dodging technology, to the tune of half-a-trillion dollars over the next 30 years.

So, should Canada proceed with purchasing the F-35, or save money and pick up the F-18 Super Hornet? This could get very entertaining over the next 12 months as costing concerns keep being raised in Washington.

Under no circumstances should Canada buy the F35. It has long been predicted that its Stealth would be revealed. Furthermore its not a Gen 5 stealth plane like the B2, F22 and F117. The idea that the F35 was going to win battles beyond visual range is also a non starter. It is a F105 lead sled with lipstick. If we want a bomb truck why not put racks in a Dash 8, cheaper and more effective.
My full rant and withering video clips Massive fail

"The F35 program may be the jump the shark moment for the Pentagon and the Military Industrial complex. Not only is the plane unaffordable it’s not a good plane."

Why do I think of the Brewster Buffalo? Well said. Nice site.

'Stealth' is a bit of a troubling concept .... during the days of "Shock and Awe" (1990)it was found that the American 'stealth' fighters showed up on the radar of the British MBTs. Clear as a picture.