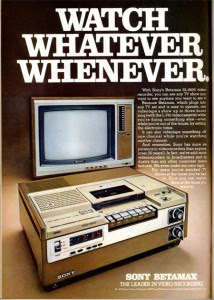 Revolutionary for its day, the Betamax format was on its way to becoming the industry standard until the appearance of JVC’s VHS a year later. Betamax was probably a bit sharper and crisper, but VHS offered longer-playing ability, which made it possible to record an entire movie on one three-hour tape. The two formats were locked in a struggle that was eventually won by VHS.

It was a titanic struggle, too, keiretsu vs. keiretsu. According to Media College, the teams lined up thusly: On the Betamax side were Sony, Toshiba, Sanyo, NEC, Aiwa, and Pioneer. On the VHS side were JVC, Matsushita (Panasonic), Hitachi, Mitsubishi, Sharp, and Akai. As we know, VHS won, and the last Betamax was made in 2002.

Email ThisBlogThis!Share to TwitterShare to FacebookShare to Pinterest
Labels: video

I loved the glory days of Sony. In 83 I bought the first stereo betamx for about $1200 from Whitby Audio. It was I tunes for that age, I could put 2 hours of flawless audio on tape. Then they stopped making movies on Betamax, it was like learning Santa Claus was a myth.

@Ed Stock, I remember buying a top of the line Gateway in 1994 for over $4000 US, the next year a better computer could be had for $1000. I just built a modest gamer with a I5 and 6870 for well under a thousand. Of course a month later they come out with Sandy Bridge.

I'm not complaining, though, Letraset and Mecanorma and the rest sucked. It sucked to use, and it sucked out your bank account. At one time, my studio had maybe $5K worth of the crap, maybe more, blue-binned with pleasure. However, I do miss the journeys to Loomis & Toles.

LOL, I have a good friend who has ALWAYS picked the losing technology. In the 70's when most of us were buying cassette tapes for our music, he bought an 8 track. When video players came in vogue (and most of us chose VHS) he bought Beta. Of note, with all the new TV's to chose from, he picked Plasma.