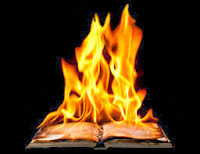 How close to home does Harper's plan to transform Canada have to get before it arrives like the grim reaper on your doorstep?

It has arrived on mine.

Years ago this country thought well enough of me to end my combat service and to send me off to become a scientist. Admittedly there was an ulterior motive. I would become one of the few who could find and provide the solution to kill enemy submarines.

I was very good at it. In fact, if one brushed off the rust, I probably still am.

Over the course of four years of study and application I read more books on oceanography than you can possibly imagine. I devoured them. I simply loved them. Every single book provided the clues to the mystery I was attempting to uncover. Some of those books were old. Very old. In scouring those arcane pages a hint of something would arise and send me searching. Ancient knowledge, well documented, provided avenues to further research.

The oldest book I could find related to the subject of killing 20th Century Soviet submarines was written way back in 1785 entitled Sundry Maritime Observations. The author was one Benjamin Franklin. When I ordered it from the NOAA library no one objected. I had a reprint edition within the week.

That book put the Gulf Stream into an older perspective. It was a starting point for another probe which would open a whole new set of question in the research group with which I was working. That group created something which didn't just find a new way to detect submarines, it actually advanced medical science.

So, when Harper starts to burn the historical research, a treasure, that this country has developed and stored, he's on my doorstep.

Stephen Harper doesn't want you to know anything that would make you smarter than him. Science, and the advance of science, is sedition. The dumber you are, the more likely you are to vote for him and the knuckledusters who swear fealty to him. His future is secure if you are stupid. He relies on that.

So, there is only one reason why this is happening.

When I asked if EVERYTHING was being digitized and recorded, the answer was NO. A culling of "non-relevant" publications was the answer.

In other words, publications which somebody, the PMO included, decided had no scientific value, was being destroyed.

How do they know? Which book has the buried secret of a scientific discovery?

The hints, the line that could lead to further discovery, is probably in one of those destroyed books. And Stephen Harper has just made sure that you and future generations will never find it.

Who burns books but one who is afraid of what is in them?

Update: Just in case you don't read the comments, Alison has provided two exceptional links which after you've read them should leave you shattered. Many thanks Alison!

Confessions of a Science Librarian:The Canadian War on Science

Scientists for the Right to Know

This unravelling scandal is disgusting.. Your article further illuminates what may be a catastrophic failure initiated by Stephen Harper and the usual suspects surrounding him & his murky personality disorder cadre.

.. the questions must be asked immediately, persistently and directly on this matter and the honest truths given in answer.. in detail.

Specifically, any rationale, doctrine, studies or analysis related to the closures.. and progressive archiving plans subsequent.

Specifically, the names of those delegated or ordered to carry out the process.. their qualifications etc

Specifically, the process directives for listing, documentation, moving, archiving and cataloguing and any supportive processes or media such as microfiche, digital copying, duplication, backups and preservation.

In short Mr Prime Minster, please confirm that property belonging to all Canadians is being protected and remains accessible as required.

This is Canada, after all Mr Prime Minister. If you have failed Canadians in this dubious matter, please explain exactly how badly, and why. And please explain why you and all responsible under you have not resigned in shame.

The dumber you are, the more likely you are to vote for him and the knuckledusters who swear fealty to him. His future is secure if you are stupid. He relies on that.

And the Canadian electorate are nothing if not reliable in this case. They have repeatedly voted for harper knowing full well what he stands for. They are complicit in the destruction of a once great nation.

That is the really sad part of this segment of Canadian history, Cap'n . . . .

"The dumber you are." That's what it's all about. Harper's reign is predicated on ignorance.

This is not change, it's scorched Earth, but done in such a way that the reconquered territory, should sanity ever return to the electorate, will remain blackened and infertile.

There was another Dictator, that destroyed books. He was a paranoid lunatic too.

Stalin, Hitler and Mussolini were all Dictators. They had very similar personalities. They all lied, controlled, deceived, thieved, were corrupt, used dirty politics, dirty tactics and all of them cheated to win. Sound familiar? It should.

Confessions of a Science Librarian:The Canadian War on Science

Scientists for the Right to Know

Words cannot express the depth of hatred I have for Stephen Harper and his cabal of troglodytic shitkickers...