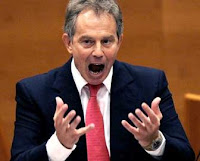 The guy disagreed with the Catholic church on a number of issues while prime minister. Now he can't hold back about its "virtues":

Mr Blair, in the famous words of his spokesman, Alastair Campbell, did not "do God" while he was in Downing Street. He later admitted that he feared he would be labelled a "nutter" if he spoke publicly about his religious convictions.

But he has since converted to Roman Catholicism and set up the Tony Blair Faith Foundation to "promote respect and understanding about the world's major religions".

In an interview published in the Church of England Newspaper , Mr Blair said: "Sometimes I think we as Christians are more sensitive than we should be although I say that as someone who when I was in office, although I was perfectly open about my Christianity, nonetheless kept it within certain boundaries that were restricted in terms of what I said publicly. The position of prime minister puts you in a unique category

"But in general terms in British society there is a risk that people see faith as a personal eccentricity."

That's because it is a personal eccentricity. Most... no all religion is superstition and the Roman Catholic church is steeped in beliefs, rites and trappings which have nothing at all to do with the supposed teachings of Jesus of Nazareth.

He admitted that conflict is "inevitable" between traditional religions and the new liberal doctrine of human rights.

But he went on: "The real test of a religion is whether in an age of aggressive secularism it has the confidence to go out and make its case by persuasion."

The fact that Blair, after engaging in an acrimonious pig-fight with the Roman Catholic church over same-sex adoption rights (among other issues), still saw fit to run off to Catechism classes as soon as he was out of 10 Downing Street is nothing short of astounding.

OB spells it out perfectly:

Why do I frown upon Blair's adult-onset Catholicism? Why do I think it's reprehensible for informed adults to join the Catholic church? Because the Catholic church is a reactionary cruel woman-hating bullying organization run by men and based on mythology, that's why. If you join the Catholic church as a reasoning adult, then you are signing up to and endorsing that organization, just as if you joined a neo-Nazi party or the Taliban or any other organization. It makes no sense to disagree with many of its most vehement and public positions and yet join it anyway. Jimmy Carter, to his credit, left The Southern Baptist Convention when it announced a new woman-subordinating stance; if he gets credit for that then Blair gets uncredit for joining the unregenerate Church of Peter.

And while we're at it, I don't believe Blair when he tells us that his religious convictions didn't influence his function as prime minister. He was spinning the same web with that preposterous excuse for a US president who rode an orchestrated religious vote to the oval office and who claimed to be "one of them".

Grown-up reasonable people have no business joining such an outfit. In fact they ought to be leaving it in disgust, not stumbling along to join it.