John Baird is either a liar or stupid ... 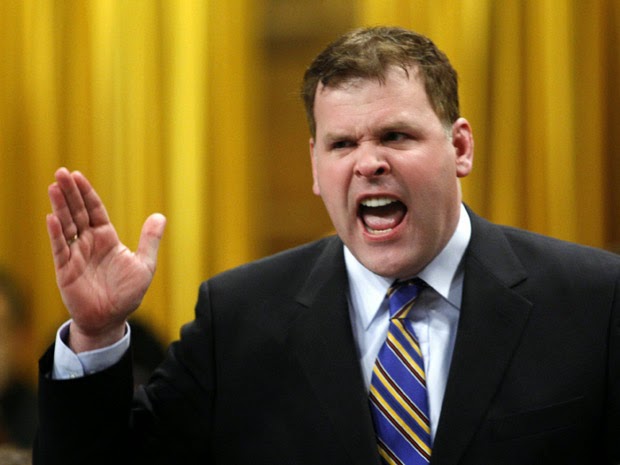 And, no, you are not limited to one or the other when trying to decide.

I've said before that Harper and his incompetent thugs are nothing more than hillbillies playing at governing with no coherent plan and no clear concept of the world around them. No one epitomizes the intellectual laziness of the Harper regime than his so-called Minister of Foreign Affairs, John Baird. This is the guy who's supposed be in touch with the world and understand the nuances of other countries and cultures. The truth is, he is utterly unqualified for the job.

After calling the former Canadian ambassador to Egypt, Ferry de Kerckhove, something close to anti-Semitic, Baird furthered the exposure of his own ignorance by stating an outright falsehood, proclaiming that de Kerckhove was on the payroll of the government of Qatar.

Ferry de Kerckhove squared this away quickly while making it clear what he thinks of John Baird and his penchant for making things up. Read it all.

[I] was never on the payroll of the Government of Qatar. Mr. Baird could have checked the fact rather than try to defame me!

Yet I would hope that he might understand the danger my grandmother faced during the German occupation of Belgium as she harbored a Jewish couple in her basement for the better part of 1944. She was visited by the head of the Komandantur of Liege who told her there were rumors she was sheltering Jews. She stared him down and challenged him to check if he did not believe her word that she did not. He backed off. The couple survived. That is real life Mr. Baird and I am deeply proud of my grandmother.

The people of Ottawa West - Nepean should be ashamed of themselves for sending this national embarrassment and total waste of skin to parliament.

Do we have to choose?

There are so many lies coming out of Harper Tea Party North that they are getting harder and harder to keep track of.

Of all the damage Harper Hillbillys do and will leave behind the damage to the hard won Brand of Canada will be hardest to repair. People around the world do not realize Harper only represents 37% at highwater.

Ex Israeli Minister: “Anti-Semetic? It’s a trick; we always use it.” http://youtu.be/D0kWAqZxJVE #bds

Truthy Alert: Israel is a terrorist country raining apartheid down on Gaza (earth’s largest open-air prison). Israel is a USA outpost put in place by the 1% to protect oil interests for the USA. Bonus: also a way to funnel money to military companies. Israel is funded by 1% right-wingers using US, Canadian & British tax dollars via enormous pressure from powerful and rich pro-Israeli lobbyists.

@Nadine, I do not want to fight the 6 Day war but I do disagree with your viewpoint. Lukid is not Israel just like Conservatives are not Canada.

Thanks,
the rest of us

Mr. Baird's mouth works fine. It's his brain that is faulty.

The people of every riding across Canada that sent a harper-con to Ottawa bears the same responsibility has Baird's riding as they are all cut from the same cloth and have the same lack of vision and intellect to run a country.

"nuance" - I doubt Baird could spell it let alone utilize it. He's the original "bull in a china shop" which really isn't what is needed in external affairs and dealing with delicate situations, particularly when insults or errors could start a war.

There is the cache version though

and here
at iPOLITICS

_____
btw, lying and stupidity are not necessarily mutually exclusive.

Thanks NVG. I'll link that through.