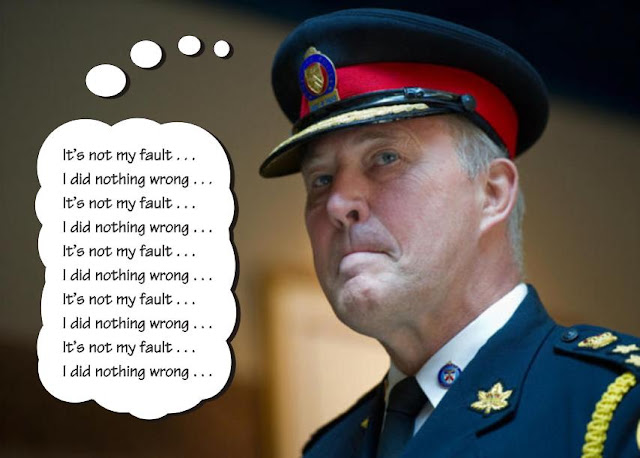 THE TORONTO POLICE ARE MORALLY CORRUPT — and Chief Bill Blair is responsible. On his watch, the police have committed the most egregious of acts: conspiracy to violate the Police Act. Starting with the G20 debacle, where officers conspired to remove any identification to link them to the crimes they gleefully committed on the citizens of Toronto.
Now, Sammy Yatim is dead, shot by Const. James "Killer" Forcillo. In a masterful exercise of intelligence and training, "Killer" Forcillo blows poor Sammy away, but that's not enough for Toronto's Finest Fascists: after riddling Sammy with 10mm slugs, they Tazer the poor boy.

Well, Billy and "Killer" will have to look in the mirror some day. I sure hope they are proud of themselves. But the shirking and evasion will probably triumph, because this is Ontario, and with the McGuinty legacy, nobody's responsible for anything.

Billy: you are an odious apparatchik. Do us all a favor and resign. Compare yourself to a real, honest hard-case policeman, like William Fairbairn. He was the man you and your henchmen like "Killer" can never be. Unlike your "finest", this Billy didn't need a 10mm Glock or a Tazer — and he patrolled the Shanghai docks back in 1910. That's a lot tougher than blasting some teenager cornered on a streetcar.

During his service with the International Police in Shanghai, Fairbairn reportedly engaged in hundreds of street fights in the course of his duties over a twenty-year career, where he organised and headed a special anti-riot squad.
Posted by Edstock at 16:04 Recommend this Post

Unfortunatley, the time to oust Blair was after the Toronto G20 debacle. The fact that he emerged unscathed sent a message both to him and his troops that essentially anything goes, and people like Sammy Yatim have had to pay the price.

Edstock, I read awhile ago, an article about Ireland's version of 'SIU'. When they got a proper one in place, they had a whole new police force. Now there's DOD/Harper's private militia.

So help us God. They don't make sense. Holyday is our next Premier?? SAY it ain't so...

They got nothin..can I get a witness?

"Holyday is our next Premier?" Probably not, is my guess, because too many people remember what Harris was like, and what Ford's circus is like.

Thwap reads me. How 'bout Doug or Rob, rising stars...get ready. It's gonna get a whole lot worse. People are sleep walkin', don't even know what's comin' down.

I been inside, we all need our own personal Jesus...Johnny Cash...