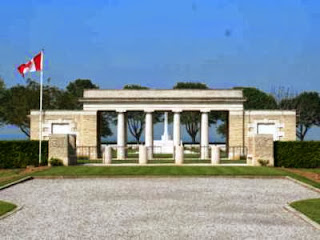 Remembrance Day, when we are all expected to observe a time to pay our respect to the fallen of the wars past, is near upon us. As the 11th of November approaches some of you will be feeling the pressure to attend a ceremony at a local cenotaph. And, I know, some of you are feeling uncomfortable or maybe just inconvenienced about the thought of pulling yourself out into the bitterness of a Canadian November day to do that.

I understand. Before I go any further however, let me give you a sketch of a CV ... just so no one else misunderstands anything I'm about to tell you.

I am a long service veteran, now retired. I have served the same sovereign in three naval services. I have fought in two clearly definable wars, both of them much smaller in scale than either the Great War 1914 - 1918 or the 2nd World War 1939 - 1945. In fact, both were shorter in duration and the expenditure of resources than the Korean conflict. I have served on peacekeeping missions during which I saw some of the horrors humanity can serve upon itself when the distinction of power is reduced to possessing a bag or bags of UN distributed flour. I have been called upon to engage in "discrete" operations which were no less than close quarters combat engagements with an enemy intent on preventing me from completing the task I was attempting to undertake. I have had young men under my command killed in action and more wounded in action. I was wounded during an engagement. I have shared the post-combat depressions which plagued most of the people with whom I have served.

During all of this, I can't ever recall reminding myself how I had signed up to do these things for my country or your freedoms. That may have been a corollary effect, but believe that you were never on my mind - at least not in any guiding sense. My motivation came from pride in my fighting comrades, my ship, my commando or that larger organization which gave me the strength of an established unit. It came from a sense of belonging - belonging to something uniquely distinct from the mainstream of the society from which I had emerged. And there were occasions when my motivation was purely self-preservation.

So, Remembrance Day. What would I expect you to do?

How about, whatever makes you feel comfortable. If I choose to attend a ceremony and demonstrate remembrance for my fallen comrades does not mean I expect you to do the same. In fact, you can't. I can no more tell you what a trench in 1916 Ypres was like than you can tell me what it was like spending months away from home with my finger on the trigger during the Cold War. I spend more than a single day remembering the things that culminate in Remembrance Day. I would be close to accurate if I told you I think about my fallen mates every single day of my life. You can't possibly do that, nor should any rational person expect you to.

Do I expect you to stand there on a cold November day for me or my comrades' benefit? No, I do not.

A huge number of you wear a paper poppy. That little bit of time you took to pin it on and the contribution you made to get it is enough for me. To know that for a moment you participated in a small gesture and wear that little emblem demonstrates all that I need to know. You do understand and you're showing it.

Does this mean I don't want you to attend a Remembrance Day ceremony? Far from it. I would love to see huge crowds at every cenotaph in the country. If, however, you cannot do so, or feel uncomfortable or inconvenienced it's just fine if you don't attend. No one can force you and you should not feel pressured just because somebody else thinks it's "proper". Remembrance is a personal thing and you can do it any way you like. Sometimes that will be the thought you feel when you remove that paper poppy from your coat.

A group we can guarantee will attend Remembrance Day ceremonies will be the politicians. Unlike you, they participate for completely different reasons. While my words to you, in this post, are provided in absolute sincerity, Part 2 will address the cadre of politicians who are there to gain political traction.

Morning, Captain. Very good to hear you in such fine form.

Rick Mercer did a strong piece on vets being turfed just before their pensions kick in. The audio ran on CBC radio on Tuesday and it's also now on youtube.

Harper was Policy Chief for his, Northern Foundation of 1989. Harper had hired Wolfgang Droege and his Heritage Front as, security for Preston Manning.

Six members of my family, served in WW2. Our young Canadian boys were shot and blown into fragments so, we wouldn't have Fascism and Dictatorship in Canada. Quite frankly, Harper is not worth their dying for.

I hope Harper at least has the sense, to stay away from our, Armistice Day Services

Thanks Alison, good to hear from you too. I'll be using that little video in Part 2. Thanks for the link and thanks Rick Mercer!

And now this, this evening from Murray Brewster

"The Harper government has tabled legislation to ensure soldiers released from the military for medical reasons get priority for other federal jobs.
It's a move one national union says is meant to take the sting from accusations that troops are being dumped before they can qualify for pensions."

"Just how many jobs would be available to former soldiers is a matter of debate given the Harper government intends to cut as many as 19,000 jobs from the federal payroll...
Annually, about 250 ex-soldiers fall into the category of not qualifying for a Canadian Forces pension. That is out of approximately 1,500 to 1,700 who face medical release each year."

Thanks for all you did sir.
My time serving didn't result in me being shot at, but on talking to my Grandfather, Dad and Brother I have a little idea of what a shooting war is like and your efforts in trying to keep our country whole are more than appreciated.
I'll raise a glass or two to all our absent friends on the day.

During World War II my mother was in the Women's Army Corps and two of her brothers were in the army. She never actually knew much about what they did, as during the war they had little contact, and afterwards they were all working and raising families in different parts of the country.

I didn't realize one of my uncles had landed at D-Day until he went over on the QEII cruise for the fiftieth anniversary. The other one fought in Italy. I guess they talked to their own kids about it some.

I saw some WWII and Korean War veterans talking on TV last night. Some of them are still bothered by the thought of people they killed, though at the time they felt they were just doing their jobs.

Better to let them talk to the kids about war than any jingoistic politician.

Very nicely put, as always when you post on military matters.

As a small token of appreciation, here is another Remembrance Day post you might like. The author is active duty in the states, and making a bit of a name for himself over at Esquire.