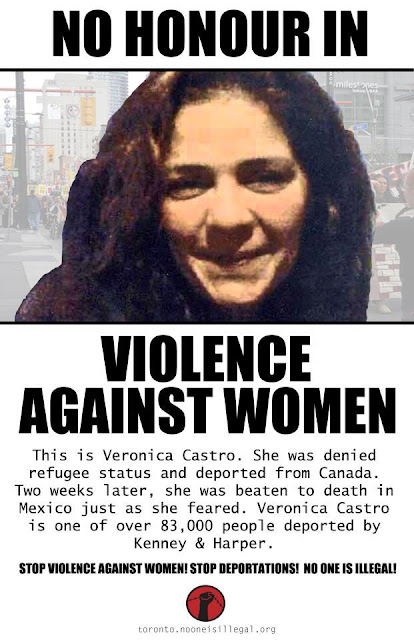 NO ONE IS ILLEGAL - TORONTO is a site you should visit.

H/T — Scanner
Posted by Edstock at 17:09 Recommend this Post

Email ThisBlogThis!Share to TwitterShare to FacebookShare to Pinterest
Labels: Harper fail, no one is illegal, Veronica Castro, violence against women

Harper and Kenney's ANTI-immigration laws are disgusting. RIP Veronica Castro. We certainly failed you as a nation.

I certainly have no problem with keeping out those guilty of violent acts but this situation is disgusting and shameful. I think its very necessary to put a human face on this issue.

Our sending back of U.S. war resisters is disgusting also.
In the 60s we showed more compassion.

It's not like the Cons don't want any immigration. They want lots, but they want 'em scared and demonized so they won't have the gumption to push for fair treatment. They want low-wage immigrants, underclass immigrants. Immigrants whose desperate presence makes it easier to ratchet down conditions for everyone else as well. Not immigrants integrating and demanding a fair shake like everyone else.

Although nowadays they may have found their solution so they won't need immigrants who get to stick around, become citizens, form communities, put down roots, and get uppity: Temporary foreign workers paid below minimum wage, who can be shipped out the moment their employer doesn't want them.