The Manning Centre for Building Democracy for Cons 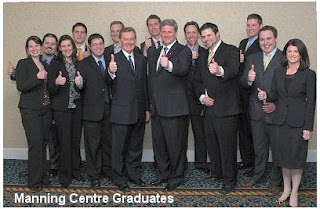 Preston Manning, Stephen Harper, and Rona Ambrose pose with "the first graduates of the Manning Centre's Executive Program in Political Management at the Future Leaders Series Dinner held at the historic Chateau Laurier in Ottawa on April 18th, 2007"
... one of whom appears to be doing up his fly.
.
I didn't know about this rightwing think tank till I saw The Cylinder's post this morning with a link to Sooey for a G&M article from 2005 :

"Former Reform Party leader Preston Manning and a small group of friends have raised an initial $10-million from wealthy Albertans to launch a new non-political institution designed to promote conservative ideas in Canada...The aim of those supporting the Manning centre is to have conservative political forces win two of every three elections by changing the way Canadians view public issues, instead of losing two out of three, or three out of four, as conservative parties have done throughout Canadian history."

"Calling all students: Learn the effective practices for campus activism, and how to plan for political participation.
The intention is to ensure each participant develops the social and intellectual skills to realize their respective goals, and be an asset to Canada’s democratic-conservative tradition.
You will hear from some of our country's most respected politicians, campaigners, strategists, journalists, and activists."

And they are?
Presenters : Monte Solberg, Michael Coren, Tasha Kheiriddin, and Blogging Tories Stephen Taylor and Aaron Lee Wudrick.
Alrighty then.
A page of members' contacts and their specific areas of expertise is provided for media requiring experts to interview, thus going some distance toward answering the question of why the experts interviewed by the media are so often conservative.
They also support an online journal, C2C, featuring the writing of many of those mentioned above, plus David Frum, Tom Flanagan, Kenneth P. Green of the American Enterprise Institute, Christopher Sands of the Hudson Institute, and a not altogether surprising number of familiar newspaper editors and columnists from across Canada.
Do stop by the photo gallery to see Ottawa mayor Larry O'Brien, Joseph Ben Ami, Dave Quist of the Institute of Marriage and Family, the guy doing up his fly, and, of course, Steve.
Cross-posted at Creekside
Posted by Alison at 10:00 Recommend this Post