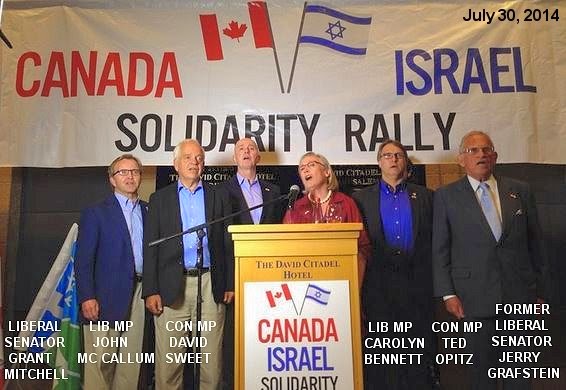 Oh but. The dead Palestinian Children, are merely collateral damage. They just do not count nor matter.

The Canada, Israel support rally, is utterly disgusting. Celebrating the death of Palestinian children, is worse than disgusting.

Nor did we celebrate the deaths of the Jewish children, with tattoos on their arms.

Six members of my family served in WW2. One brother was in the liberation of a concentration camp.

Gingersnap, if you're going to make statements like "I will never see the Jewish people in the same light", I will ban you from posting without a second thought. Your statement is patently anti-Semitic and has no place here. You have one opportunity to retract your statement.

The "Jewish people" as you put it are a global Diaspora of a diversity of cultures, beliefs, ethnicities, customs, and values, rich in intellectual and artistic engagement. The actions of the Israeli government and military are those of a minority faction of people who happen to be twisting their religious convictions to bloody ends. They are no more representative of Jews than Harper is of Canadians.

If you wish to feel compassion, then feel compassion for all those in whose name and interest the current leaders of Israel presumes to act together with those innocents it kills. Feel compassion also for the blind, brainwashed and hate-filled servants doing the killing for the bitter old men of Hamas and Israel. They do not live happy lives.

What happens to the Palestinians in the West Bank and occupied Gaza?

Aren't they allowed to defend themselves?

That's what should be thrown in the face of these brainless apologists for mass-murder like Opitz and Macallum.

I have never justified Hama's rocket-attacks. Just as i never justified the 9-11 terrorist attack. But those LibroCon fools are justifying indiscriminate slaughter and they need to be shown the bankruptcy of their beliefs.

BTW: Gingersnap? Your comments made me queasy as well.

.. this should be a time of shocked consideration, questions, compassion .. revising our perceptions.. and yet another ghastly wake-up call.. for individuals & for Canada & all Canadians.

.. indy media, Twitter, email, all social media.. are shrinking and revealing the world to us.. whether we like it not. I am forced to remeasure & re-examine my perceptions either daily.. or minute by minute

.. the choir of Canadian MP's disgraces all of us. As Canadians we are wearing their decisions, actions. Its a discordant, menial, despicable 'money shot' moment. Hope they're proud of themselves. I was disgusted. They should have wrapped themselves in somebody's flag and waved a bible in one hand

They might as well be cheering for AIDS, natural catastrophes, psychopaths, weapons manufacturers, ebola or calamitous global warming. These failures represent Canadian voters & their communities? I think not.