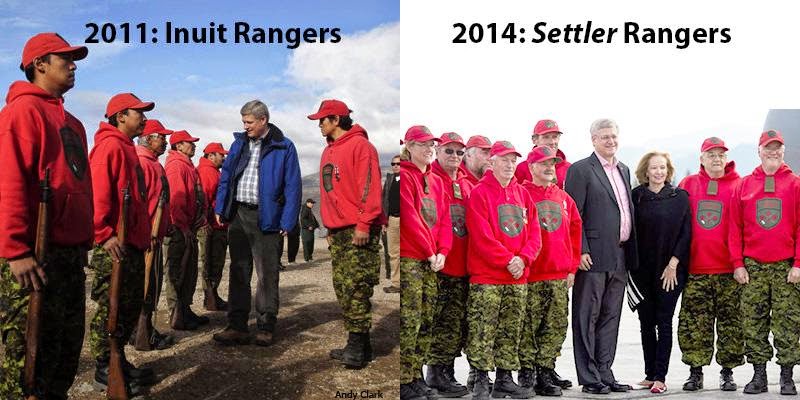 Looking through pix of Harper posing with rangers in the North ... last year the group he posed with in Nunavut were Inuit. Perhaps this is a different company of rangers from a different community.

.. and who is the woman standing beside the guy with the outstanding pot belly? Reddish hair.. surely that is not Laureen Harper.. who is distinctly blonde.. It looks like Alison Redford somewhat..

Edstock, those are WW2-era Lee Enfields No. 4s, still in .303. They've been serviceable for a very long time, which says more about their suitability and ruggedness for the Arctic environment and role than their age.

The Cons mean to replace them, but with what it will be interesting to see. It's hard to think of an OTS equivelently rugged bolt-action rifle in current manufacture. Most options are prohibitively expensive precision sniping systems, or more delicate hunting rifles.

I have also read about the Lee Enfield being the best gun for Artic condintions. Now a liberal goverment might make a task force to make a better weapon. However whats the use?

I can explain the difference in the photos. The recent photo is of today's rangers in the Occupied Inuit Territories. Harper got the idea from Netanyahu.