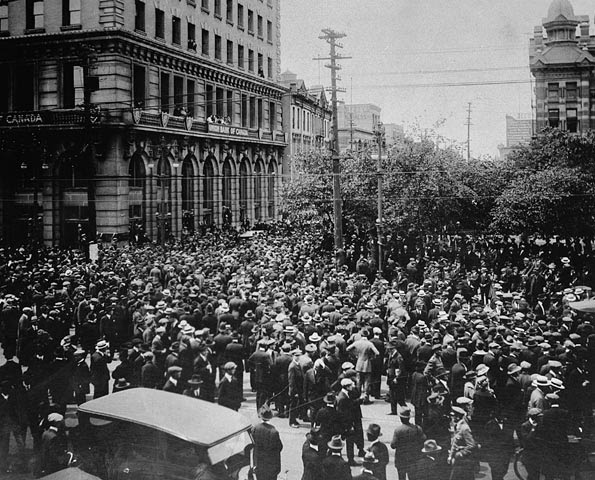 The Mound of Sound nails it.

We've been warned.   The Harper government's rash interventionism in Air Canada and Canada Post strikes has to be seen as a declaration of a war on organized labour in Canada...

The middle class operates as a buffer against extremism on the Right and the Left.  When it functions properly it provides people with hope and security, a vested interest in their society.

As I wrote yesterday, the right to organize trade unions is specifically acknowledged in the Universal Declaration of Human Rights.   In signatories to that declaration, Canada included, it is a fundamental human right.   You cannot allow people to organize trade unions and deny them the right to strike for that deprives them of their fundamental human right.  And that, sadly, is just what Harper seems intent on doing...

In circumstances such as these there is really only one effective response and that is the general strike.   Labour walks out, shuts the place down, says "oh no you don't."  A general strike in defence of a fundamental human right is not excessive nor unjustified in a truly democratic society.

A tangential theme in my research shows a unionised firm changing owners several times in three or four decades. Every new owner resulted fewer workers employed in less secure jobs, until eventually all the workers lost their jobs, and the firm become a management company running its business through subcontractors. I once returned to the blue-collar industrial town I grew up in after multi-year absence. The only way one could find wage employment there was through one of the assortment of temp agencies that had sprung up in the intervening years. There was no job security.

Years and years of neoliberal policies from government, and the slow erosion and sometimes frog-boil coopting of labour and its leadership against themselves, have severely weakened the working class.

Stephen Harper has now demonstrated that he will use legislation to immediately bludgeon any remaining resolve from us. This in turn gives the power to owners and managers in labour negotiations: if we don't like their proposed agreement, Stephen Harper will make us eat it for them.

"if we don't like their proposed agreement, Stephen Harper will make us eat it for them"

The precariat is the word to describe the new class (under class?) of people that in essence are serfs in the new feudal system being created in the West.
http://www.guardian.co.uk/commentisfree/video/2011/feb/16/precariat-flexible-labour-market-video
First in a series on the topic and it highlights the trend towards abused agency workerism.

Harper is itching for his own Wisconsin moment. Willy has an update:

CAW has settled but new workers' benefits were sacrificed from what I understand.

OK, you folks are thinking “troll alert”, but really, that’s not the case. I don’t comment enough for you to recognize me, but I read TGB regularly because I really enjoy what you folks are doing. Do I agree with every post? No. Do I enjoy the comments and good old fashioned debate that sometimes ensues as a result of a controversial post? Yup.

So here goes. Keep in mind this is the opinion of the average Joe. I don’t know the ins and outs of politics near as closely as you do. I was undecided at the last election as to which lying leader I wanted to represent Canada. In the end, I figured that lying SOB that I voted for last time has had his time playing bully and voted “strategically”. Unfortunately, the incumbent in my riding pretty much had it sewn up before the election was called. (Having said that, I feel that he is one of the few Cons with a bit of integrity.)

And I hope that the good Rev. Paperboy will still drink with me, especially since he is that much closer to me now (over 10,000km last year at this time to under 5km now).

And lastly, for some reason, my work firewall blocks out “Mound of Sound” so I will have to read that link when I get home. But I doubt that is going to change my opinion on this issue.

There was a time and a place where unions were vital and required. Workers wouldn’t be receiving the benefits, workplace safety standards, wages today were it not for actions of the unions in the past. A lot, (if not all) government regulations with respect to working conditions and wages were as a result of union activity. But in most cases, has the need for a union not passed in this country?

I guess that I have been fortunate. In my working career, whether on the floor or in the office, I have worked in environments where there was/is mutual respect between the employees and management. A union in these environments would benefit only one group, the union itself in the form of union dues.

I don’t believe that these rights to have unions be taken away. But the first hand stories that I have heard on the “abuse of the system” that some union workers will enforce, because they can, certainly cause me to less and less sympathetic to the union. Are these abusers the accepted normal? Not by any means. They are the minority.

The stories of the abusers of the system seem to be more than the management abuse of the system. Do I have hard facts? Of course not. This is the comment section, and I am only stating my opinion. And I am nothing but an ignorant person in world of union abuse, because, as stated earlier, I have been very fortunate to work in good environments.

But the abuse of one side just perpetuates the abuse by the other side, until you get to the point where the negotiating is stuck on how long a worker is allowed to take for a bathroom break!

A unionized environment does not seem to encourage a person to be able to go above and beyond their outlined duties. There are people out there that feel they should be doing more because that is a good work ethic. The unionized environment seems, if anything, to discourage workers from doing that little bit extra because then (i) the management team will expect it and (ii) the other workers will be pissed because you went outside of the agreement.

Do I agree with back to work legislation? In these cases, no. Let them stay out as long as they want because nowadays, there always seems to be some alternatives. The longer they stay out, the less chance that they will ever receive a deal that adequately compensate them for their lost wages and benefits while they were off. There was a company down the street from where I work that went on strike for I think was about a year (maybe even more). They were a proud group when finally they got what they wanted and were back to work. Six months later, the plant closed. The company was in the middle of determining what to do in light of a declining market. Ultimately a plant closure was determined to be the best way forward for them as they could manufacture all there forecast without one of their plants. It was an easy decision for them which plant to close, since they have nothing but “problems” in this plant. Was that strike worth it?

There are certain jobs that I believe are vital to the flow of everyday life, to keep people safe. Do I have an answer for those situations? No. I guess I’ll argue on the other side of the fence when that situation arises.

I had best get back to work now.

Otter, you miss the point. Back to work legislation is sometimes necessary. That is usually in cases where the strike has become intractable and has no prospect of resolution. A strike is inherently a struggle and it is labour's right (often its only means) to obtain better working conditions. The right is neither arbitrary nor absolute but is subject to a good many conditions to ensure a base of fairness.

That said, the government is only entitled to become involved in collective bargaining as a last resort. When it intervenes prematurely it takes sides - it's acting on behalf of capital and against labour. When the nation accepts the Declaration of Universal Human Rights, the governments of that signatory country no longer have a legal right to that sort of partisan intervention. On this front, Harper's government is acting outside or contrary to the law that governs it. It is an outlaw.

I knew I was getting off topic...I just wanted to rant a bit.

Well, Wikileaks has said, the N.A.U. is just around the corner. From the three country's, they will have a huge, cheap labor force. Much the same as Mexico, China and India have. The U.S. was just waiting for Harper's majority, to start the N.A.U. in small increments at first.

I totally agree with you harebell. You hit it right on the nose. The American people saw this coming long ago. They intend to fight the N.A.U. to the last ditch.

For some reason, the U.S. citizens, despise Harper. They said, there is a petition to prosecute Harper and Peter MacKay for war crimes and crimes against humanity. The petition does exist, it's with presscore. They say Harper's election win was rigged.

Ex Premier Campbell of BC, worked hand in hand with Harper, to strip BC of all, even BC's HST was designed for big business. BC does not own any of their, vast natural resources. Campbell thieved BC's assets and sold them. BC is stripped of absolutely everything, there is nothing left, for BC to recover with.

The giant corporations, own all of the globes natural resources. They control all of the money. Once governments allowed corruption in their ranks....They now find the country owned, by the very corporations, they took the money from.

Some one else had a plan for global governance. Only that was called, The Thousand Year Reich.

FWIW, when I first entered the work force, back abut 1965 one of the things I heard was:

"There was a time and a place where unions were vital and required."

Another of the things one of the older (at the time) workmates mentioned that ..... it is one of the first things he heard upon entering the Labour force. This was sell before pensions and health protections and such.

It is nice to sound rational and driven by facts and circumstances. That is all that is good for .... SOUNDING, not being. Anti-union rationalizations clothed in bullshit.

"A unionized environment does not seem to encourage a person to be able to go above and beyond their outlined duties. "