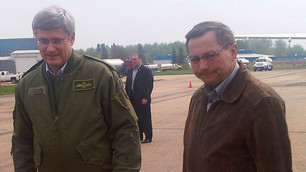 Note the wings on the breast of Stephen Harper's bomber jacket as he visits Slave Lake with Ed Stelmach. A badge with two wings is worn by a member of the Canadian Forces who has completed a course of training qualifying them as aircrew (non-aircrew like engine or airframe techs wear a half-wing badge). These full-winged trades include pilots, navigators, and loadmasters.

The courses are arduous and train the badger wearer to very high, world-class, degree of competency. The wings are not awarded until the courses have been successfully completed in the same way the title Doctor or the post-nominal PhD or MD are not used by people who have not earned the associated parchments. 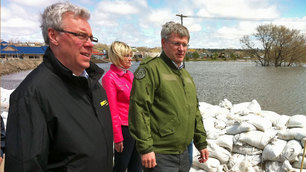 Stephen Harper has not completed a course of training culminating in the awarding of such a badge, yet this is the second time we see media images of him in the same jacket. The first was several days ago during the Manitoba flooding. If you look closely, someone had the wherewithal to remove the wings from this particular garment before the PM donned it. Not so most recently, as we see above.


The last time I checked, misrepresenting your qualifications like that was a crime with jail-time. Moreover, it demeans the integrity of the institution and slights every aircrew member who has qualified for their wings or died wearing them.

I don't know what he's doing for the Air Force on those long flights that they let him keep the coat...but I can tell you that in the army I joined, a politician walking onto an installation wearing half a uniform and jump wings, or HMC Dockyard or Ship wearing submariner's dolphins, would likely need the medics to carry him out...
Posted by Boris at 15:53 Recommend this Post

Email ThisBlogThis!Share to TwitterShare to FacebookShare to Pinterest
Labels: harper

SH does like to play dress up. Kinda makes me wonder out the *costumes* we don't see.

SH does like to play dress up. Kinda makes me wonder out the *costumes* we don't see.

correction
SH does like to play dress up. Kinda makes me wonder about the *costumes* we don't see.

Can he not be court-martialed for this? Granted it has been quite some time since my Father served actively, but that was his immediate response when I mentioned this.

He was, quite rightly, outraged that Harper would wear official uniform to which he is not in the least entitled.

Harper, unlike Mussolini, Hitler and Franco, never even served with the military.

But like them, and GWB with his "Mission Accomplished" flight suit, likes to pretend to be a Warrior Leader for PR effect.

I guess he figured if he could get away with billing himself as an economist without a PhD, he could be a pilot without flight school, too.

Good stuff. Stay on this kinda stuff that we non-mil people have no idea about. Thanks.

The military and their uniforms are just props for the prick in charge to act like he has some fighting credentials. Like most cowards the twat can play dress up but expects others to die for his bottom line.
You just know that the arse wipe wouldn't even survive basic, let alone anything where the opposition fired back.
The Harper Party of Canada are parasites and cowardly ones at that.

Oh but, this is the "Harper government".

Even the Americans say, the Harper governments election win, was rigged. They also call Harper petty and a gasbag. I concur with them.

Sassy, your comment has given me some very unpleasant images.....

A couple of points. First, he can't be courtmartialed. He is a civilian, and is not subject to the Code of Service Discipline under the National Defence Act. Sections 60-65 of the NDA refer.

Secondly, things like this annoy people who have earned the right to appear in uniform. It's not a costume. It's not a fan club. It's earned.

Thirdly, wearing it improperly is offensive. You cannot mix uniform with civilian clothing. You cannot wear uniform without headdress, unless you are in church, asleep, in a food line or under charges.

Contrary to some comments, Peter MacKay was authorized, it appears, to wear uniform on the Nimegen Marches last year. He was not authorized, I am sure, to wear it incorrectly.

Not the same jacket - most likely he was given the jacket in Slave Lake by the crew that flew out there. I know for a fact that in Portage he was given that jacket while he was flying in the chopper. Sometimes a jacket is just a jacket folks.

Ryan,
Never said it was the same jacket. And no, it's not just a jacket. That jacket combined with that particular politician is part of a calculated propaganda exercise.

There's also no reason the aircrew need to lend the PM a jacket as it is not an item of personal protective equipment. Some member of the crew had to go without a coat so the PM could get his poser photo-op.

"Not the same jacket - most likely he was given the jacket in Slave Lake by the crew that flew out there. I know for a fact that in Portage he was given that jacket while he was flying in the chopper. Sometimes a jacket is just a jacket folks."

Soemtimes a jacket has special properties, like being anti-static. That's kind of important when working around aircraft. The jacket in question is a piece of equipment. As the PM does not posess this equipment, it would have been loaned to him by the aircrew.

It's not like he landed the chopper in the middle of Winnipeg himself in front of a "Mission Accomplished" banner. You people need to relax.

Jeremy,
it's a propaganda exercise that blurs the lines between a particular politician and his brand and the CF. After 5 years as PM, there's no way some sort of anti-static jacket would be forgotten from prime ministerial helicopter logistics. Moreover, you'd think the premiers and others travelling with him would be wearing something similar if it were necessary. And still further, I've flown CF aircraft with kit a lot more lethally sensitive to electrical charges and sparks than the PM's Blackberry. Your reasoning is baseless.

If it was a one-off instance, it mightn't be such a big deal but it happens all the time with these guys. And we'll see a lot more of it over the next few years.

Oh my, the army.ca forum I suspect you guys cruised in from is quite the excuse chamber! ...didn't know the army to be in the business of making excuses for politicians...

I should point out that it is not just Stephen Harper or politicians in general that evoke this response.

There was a bike courier in the city where I used to live who walked around in an old CF combat shirt that had a badge on it from my old regiment.

I had to restrain myself from removing it because, you know, if I were to tackle a total stranger and start ripping pieces off his clothing, well, suddenly *I'm* the bad guy.