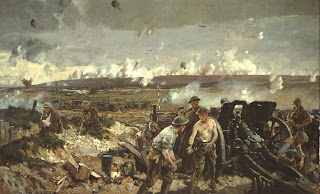 Once upon a time Canadian foreign policy, especially in the realm of peace and security, was centred on the United Nations the exercise of [relative] impartiality when dealing with parties in conflict. Canadian governments typically officially sat out of the various post-war ideological and post/neo-colonial Periphery misadventures the big boys of the Western gang habitually got themselves in to. We largely stood back and tried to clean up the mess.

Some folks in this country, however, got to thinking that sort of approach to world engagement represented some kind of national phallic deficiency. Real states, like Britain and the US, apparently go out and kick the ass of various unreasonable foreigners. Of course, there were things like the complete failure to prevent the Rwandan genocide, the Balkan clusterfuck, and of course 11 September 2001, which provided good reason to think the world had changed. Some then concluded that 'peace' institutions didn't work or were no longer relevant. What was needed was a muscular foreign policy and a far more aggressive Canadian role against these 'rogue states'.

So, we saddled up with the big boys' posse and galloped off a-fighting.

Unfortunately, we forgot that whatever their intentions, when the big boys did this in the past, they invariably ended up supporting all sorts of really vicious and nasty characters who ruled and policed their people with violence and fear, from Iran and Iraq (at different times), to Latin America and Africa. Invariably, we negleted to acknowledge, these adventures eventually backfired on expeditioners, usually at the cost of countless (usually local) innocent lives and vast sums of secret money. The Shah was revolted out of Iran, Pinochet ended up an international criminal, the Vietnamese binned the last coloniser, Latin America went left, Saddam turned on the US, and on and on.

So now, Canada, having joined the biggest gang, moves through its initiation. We now support our little Afghan KGB ('God, how valuable their intel!' says our flinchless general), corrupt little 'elected' leader (now musing openly about switching sides), and squandered the lives and treasure of ours and theirs. At home, in order to protect its membership in the gang and investment in the adventure, our government must subvert our own democracy and the truth of our involvement by hiding the facts with censor's ink, blocking our questions, and suspending our parliament.

Are we feeling tough enough yet? Or has gang life begun to lose its glamour, yet again?

ETA: Buckdog seems to be breathing the same air today.
Posted by Boris at 11:39 Recommend this Post