A tale of two pictures 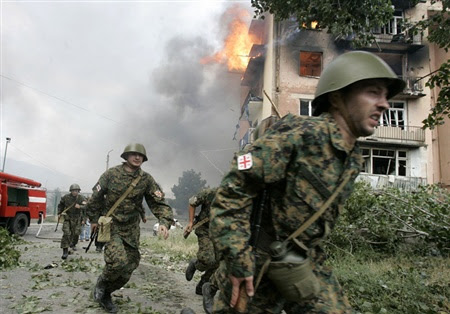 The upper picture shows US Marines in their latest temperate woodland combat uniform. The lower image is recent footage of Georgian troops wearing exactly the same uniform down to the sleeve and inclined breast pockets. The foreground Georgian even carries a US pattern water bottle. That similarity sums up pretty much everything not being said about this sudden war.

It is common knowledge that under the Bush administration the United States has been courting influence in former Soviet republics. Initiatives involving missile shields, military advisers, and basing rights from Poland to Uzbekistan have expanded US influence right up the the Russian border. NATO membership has been granted to states like the Czech Republic and Latvia. Georgia, prior the this sudden war, was also openly seeking membership. The Times has more:

One key is the recognition earlier this year by Nato and European Union countries of Kosovan independence from Serbia. Russia opposed this; Serbia has long been its client state. However, it tried to turn the defeat to its advantage by pushing the argument that, if Kosovans could be independent, so too could the Abkhazians and Ossetians.

This was a significant development in Russia’s reaction to what it regards as steady western encirclement.

Moscow has repeatedly accused the West of reneging on post-cold-war assurances that there would be no expansion into the vacuum left by the Soviet Union. Not only have former Soviet satellite states in east-central Europe joined Nato, but Georgia and Ukraine – once integral parts of the USSR – are also seeking entry. The Georgian army is being retrained by American military advisers.

Poland and the Czech Republic have agreed to host American missile sites, ostensibly as part of an antiIranian shield. The thought of Ukraine and Georgia doing the same gives Kremlin securocrats nightmares.

In South Ossetia, Russia is drawing a confrontation line in the sand. If Georgia joins Nato, Moscow is saying, there is no way that South Ossetia and Abkhazia will be part of it.

Did the Bush administration (and NATO) actually think Russia would sit there and let is border states join NATO or ally themselves with the US without reaction? I mean come on, to its own benefit or detriment the USSR and Russia have routinely used military force as a key policy instrument. There's a point where too many NATO or West leaning countries on your border is simply too many. If Georgia had at a future point been allowed to join NATO, then it would fall under NATO's mutual protection arrangement which would effectively neuter any real Russian capacity to act. Doing so would theoretically trigger a military confrontation with NATO. The Cold War demonstrated this is an effective deterrent to war.

So, Russia takes a book out of the Bush playbook and uses the existing pretext of South Ossetia as reason to spoil the NATO game. If reports are correct, Russia is also taking a page out of the Israeli playbook a la Lebanon 2006. While the Isreali Defence Force no doubt performed below standard during that conflict, the overall Israeli reponse to was vastly disproportionate compared to Hezbollah's kidnapping and rocket attacks. As Martin van Creveld points out, there have not been similar actions by Hezbollah since. Russia has the military capacity to escalate the conflict with Georgia beyond anything the independent Georgian armed forces can cope with. Its goal, if it does this is, is to eliminate Georgian influence in South Ossetia and Abkhazia, and vastly more importantly, scare the US and NATO away by turning the country into a security liability. Like Israel in Lebanon, Russian can withdraw at the moment its leadership think the point has been made; Georgia can only call for an end. The risk of course, is in events spinning out of control.

Oh yeah, it's now almost a given that anywhere the US is playing, there's an oil thing...

My bet? Georgia is more or less on its own. There is little aside from soft support the US can do for the Georgians that wouldn't risk a direct confrontation with Russia. Not even Bush would go there. Georgian prospects for NATO membership probably disappeared when the first Russian shells fell from the sky, because whatever NATO members think its current purpose is, it is most definitely not interested in putting itself in a position where it might have to directly confront Russia. In a nutshell, by escalating the dispute with Georgia, the Russians have more or less checkmated any US or NATO interests in the country and sent a warning to other neighbouring states that they risk attack should they grow too cozy with the West.

At another level, this excercise rewrites the theory of grand alliances - NATO v. Warsaw Pact - by preempting their formation. The Russian counter is: thinking about joining NATO is means war.

The question without an answer is whether this ugly little war would have happened if NATO hadn't allowed itself to expand to the Russian frontier, and the US hadn't insisting on planting missiles and bases around its old enemy?
-----------------------
You would think, given the last century, the lesson that strategic military antagonism is nearly never the way to avoid bloodshed and more problems would have sunk in by now. You would also think that brains in Washington and Moscow could have come up with a less lethal and risk-prone way to ensure energy security than far flung and proxy wars.
Posted by Boris at 14:14 Recommend this Post